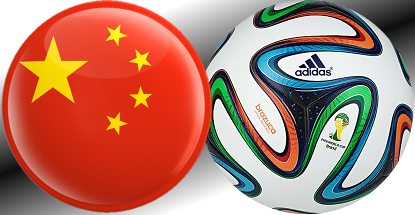 China’s insurance industry regulator has put an end to companies selling ‘World Cup regret’ policies, which are accused of being too closely linked to gambling. Insurers have been warned to stop offering such policies or face sanctions, including the temporary suspension of signing new clients.

A few weeks before the 2014 FIFA World Cup kicked off, Chinese insurance companies began offering an array of essentially novelty policies tenuously linked to the tournament. Shanghai’s Zhong An firm offered ‘night owl insurance,’ which covered medical expenses from accidents suffered as a result of football fans foregoing sleep in order to watch the matches in Brazil live on television. ‘Football hooligan insurance’ covered claims associated with violence inflicted by rowdy rival fans and/or random encounters with Luis Suarez, while ‘drunk insurance’ … well, you get the picture.

More contentious was the ‘World Cup pity insurance’ offered by Ancheng Property & Casualty Insurance, which compensated fans if their team was eliminated during the group stage. The policies cost RMB 8 (U $1.29) and paid out a maximum of RMB 49 ($8), barely enough for a beer or two to help fans get over their grief. But however small the payout, the policies also allowed bettors to file a claim if they bet on the wrong team to win.

University of International Business and Economics professor Wang Guojun told the South China Morning Post the purpose of such policies was risk transferal, which allowed them to fall within the definition of legal insurance products. To further lessen the perception that the insurance companies were acting as bookies, payouts were made in the form of Ji Fen Bao points, the digital credits offered by the Alibaba Group’s online payment platform Alipay. But since Alibaba’s Taobao site offers punters the opportunity to wager with China’s Sports Lottery, the credits could be plowed back into other wagers.

On Thursday, the China Insurance Regulatory Commission announced it had had enough and ordered companies to get back to offering traditional boring policies. An Ancheng spokesman told China Daily the firm had stopped selling the pity policies on Wednesday, but declined to say whether this was as a result of the regulator giving them a bollocking. The Zhong An drunk, sleep deprivation and hooligan policies were still being offered, with sales of some policies topping 1,000 in the past few days.