Home / Business / Report: Bwin.party considering selling off some or all of the company 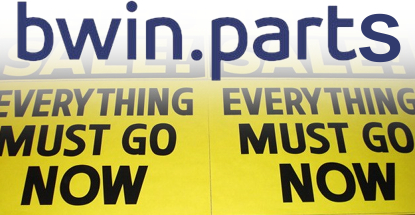 UK-listed online gambling operator Bwin.party digital entertainment is reportedly considering selling off pieces of itself following a strategic review. Quoting two anonymous sources “with knowledge of the matter,” Bloomberg reported that the company is looking at either selling off its components piecemeal or possibly putting the entire company on the block.

Bwin.party has reportedly hired Deutsche Bank AG to take a long hard look at the online gambling firm’s best and worst-case scenarios. A decision is expected in two months.

The news caps off a particularly grim month for Bwin.party, which closed Wednesday’s trading at 92.65p, a new all-time low. The shares have fallen 22% since June 10, right about the time that New Jersey’s online gambling market reported its second straight month of revenue decline. Days later, rumors of Amaya Gaming’s acquisition of PokerStars reached their fever pitch. Investors have come to realize that not only is the US market incapable of delivering the short-term revenue bump they’d expected, but PokerStars’ imminent arrival in New Jersey means Bwin.party’s slice of that pie is going to get even smaller.

In February, before Bwin.party made peace with its new activist investor Jason Ader, speculation ran high that Ader would push for a breakup of the company. Last July, rumors flew that the company would split into one division focused on regulated markets, another on grey markets and yet another on the fledgling US online market. Bwin.party pulled out of 18 grey markets last April as the company sought to improve its compliance reputation while it underwent scrutiny by New Jersey gaming regulators, a move that accelerated an already downward revenue trend.

It’s been three years since the ill-fated merger of Bwin and PartyGaming, which Calvin Ayre predicted would not end well for investors. Amaya’s acquisition of PokerStars stripped Bwin.party of its ability to describe itself as the world’s largest online gambling company, but it appears that Bwin.party was preparing to pull that trigger itself.