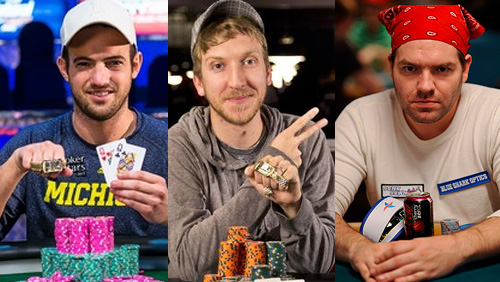 Two double World Series of Poker (WSOP) bracelet winners to speak of and we will start with the winner of Event #31: $1,500 No-Limit Hold’em (NLHE): Brett Shaffer.

Shaffer has won his second $1,500 event, in consecutive years, after besting a field of 1,631 entrants to win the top prize of $418,435. Last year, Shaffer defeated 2,816 players on his way to a $665,397 payday after beating the European Poker Tour (EPT) champion David Vamplew in heads-up action.

Many people’s tip for gold, Matt Stout, was making his 31st WSOP cash, but he had to settle for another near thing after finishing in fourth place, when his [As] [9s] could not survive the board against the [Kc] [Qc] of RJ Sullivan. The queen on the flop handing Sullivan, Stout’s chips, and he would put them to good use finishing in second place for a career best performance.

To say that Joe Cada has been knocking on the door is an understatement. The former World Champion has been hammering it with a sledgehammer.

A runner-up spot in 2012 was followed by, two fourth place finishes in 2013, but he finally grabbed bracelet number two after topping a superlative final table You expect a decent final table in a $10,000 Championship event, and this one didn’t disappoint with Jeremy Ausmus, Max Silver, JC Tran, Erick Lindgren and Dario Sammartino all quarrelling over the gold.

In the end, Cada defeated his fellow WSOP gold bracelet winner Ausmus, in heads up action, to take the $670,041 first prize and told PokerNews that in order to win these events you have to run well, and that he had been running well of late.

10 players remain in Event #33: $1,000 NLHE, and Will Givens, leads the way with 1,217,000 chips. The former Heartland Poker Tour (HPT) Main Event winner has cashed three times in this series, but it’s going to be a rocky road to the summit of this one with the likes of Dutch Boyd, Vinny Pahuja and Gabriel Nassif all remaining in the event.

Six players remain in Event #34: Seven-Card Stud, after the second day of action, and Aleksandr Denisov leads with 668,000 chips in his first WSOP cash of his career. Bryn Kenney continues his excellent series sitting in third, and WSOP bracelet winners Eric Buchman and Alex Kravchenko are also in the field.

Event #35: $5,000 Eight Handed NLHE has run into its second day of action and there is a familiar name at the top of the chip counts. Sam Trickett has had to contend with illness this summer, but he will be feeling much better after seeing his name top the chip counts at the end of Day One – 170 players remain in that one.

And finally, Event #36: $1,500 No-Limit 2-7 Draw Lowball blasted through it’s first day of action and Brian Rast leads the remaining 38 players. 241 players were involved in that one and Joseph Cheong, Ali Eslami and Phil Hellmuth all have enough chips to cause a problem or two.