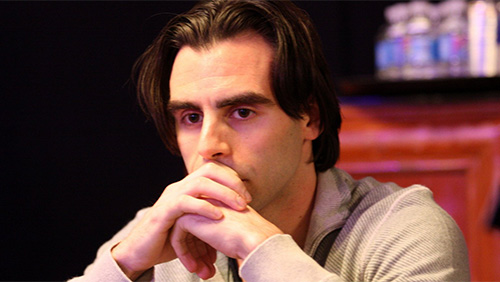 Lee Davy sits down to talk with Olivier Busquet about his role with the World Poker Tour (WPT) Alpha8, how he got into poker commentary, styles, techniques and a whole lot more.

When the World Poker Tour (WPT) launched their Alpha8 product many people were surprised to learn that the mainstays of the WPT commentary outfit, Mike Sexton and Vince van Patten, were to step aside and allow young blood to flourish.

Those fresh new faces were Ali Nejad and Olivier Busquet, and I sat down with the latter during a break in play in Event #35: $5,000 Eight-Handed No-Limit Hold’em (NLHE), to chat about the role of commentators in the game of poker.

So where did it start for Busquet?

“I originally got involved through Poker PROductions and Mori Eskandani. I played Poker After Dark and the NBC Heads Up and I spoke to Mori and told him that I was interested in poker commentary and if something came up to think of me.

“Lo and behold, that summer was the start of Poker PROduction’s relationship with the WSOP, and they introduced this idea of bringing in players to potentially do some commentary. I was one of the people they asked to try it out, and I was well received, and enjoyed it. They asked me to do some commentary on the Main Event, mostly on ESPN3 and a little bit on ESPN2.

“A year later, I was the back up to Antonio {Esfandiari} and when he made the final table of the ONE DROP I got the opportunity to commentate on that. It was a great opportunity and I was very fortunate as it translated into the gig that I have at the moment, which is the WPTAlpha8.

“I am really excited about the Alpha8. It’s a great show, and we have just finished our first season, and are looking towards a second season. Hopefully, it will catch on as more of the poker world finds out about it, and more people find out about FoxSportsOne in general.”

You did some work with the great Kara Scott. Tell us a little bit about that?

“Kara is great. It was two years ago during the Main Event. Antonio was doing the commentary and they found a place for me to do break segments with Kara. You are sitting in a chair right in front of the camera, you are right next to the loud and boisterous crowd, there is not much of a script, you have very little time to prepare, or practice, and I was petrified. It was more difficult than commentary, where the camera isn’t necessarily on you. Here I was answering ad hoc question right under the spotlight, but Kara was wonderful. She made me feel comfortable and saved me in spots where I didn’t know what to say, or do. I was so fortunate to be with her. She made me look so much better than I would have had she not been there.”

And you also got a chance to work with Jesse May, what was that like?

“I am a big fan of Jesse May. The first time I did commentary with him was in Prague, and the second time I worked with him in, was again in Prague, where I did the WPT Live Show. He has a lot of opinions about poker, and has been in the game for a long time. I love speaking to him about all aspects about the future of poker and hearing about his thoughts on how it will evolve. He is a really interesting person to speak to about these issues.”

It’s great to hear Olivier speak so warmly about commentary. Sometimes at live events, trying to find poker players to give up their time to take the hot seat is tough. I think the job is very rewarding and people who refuse it are missing out. Olivier has a slightly different view.

“I actually think it’s personal. For me, I was grateful because it was something I wanted to do, and to try and translate it into something deeper in the TV industry somewhere down the line, which is something that interests me. I understand other players not wanting to get involved and I respect that.

“I do think it’s a good exercise to talk out loud in an exposed way. It’s very different when you do it in a way where everyone can hear what you are saying. I think some players should be careful about that, as it might expose the way they think, or they may be subconscious about the way they come off to a broader poker audience.

“It’s also a small opportunity to give back to the poker industry. If you can give some insightful analysis to add to the poker fans view of the game, then it’s a good thing for the game on the whole, and makes the overall show more interesting and exciting for the audience.”

When Daniel Negreanu said he wanted more fun in poker he took some time out to suggest that poker commentators could lighten up a little bit. My own personal opinion was that commentators might be somewhat muzzled by their paymasters. What is Busquet’s opinion on these suggestions?

“I think it’s very person specific. I don’t feel restrained, but my personality is of a more naturally serious poker analyst; I am not a goof ball, I am not humorous. I don’t think I would fit that role if that’s what they wanted. I guess Daniel’s vision of what a poker commentator should be like is a little bit of a threat of my possibility to be valuable to the poker community?

“Part of me agrees with him, but I don’t think you need to sacrifice insightful analysis for, say, character development, or fun. You don’t need to choose between the two, but I think televised poker could make more of an effort to develop more personal stories to help the audience to connect and relate better to the players.

“This is what makes the Alpha8 so great. The buy-ins are so big so the player pool is very small, and this helps the TV audience connect more with the characters when compared to the regular WPT show, where the final table could be filled with players you have never seen before – and I might not see again. Even that has its benefits because you get the Moneymaker type stories – so I think there is room for both type of shows.

“I also think the analysis itself is important, and you can make it too remote and wonky so people can’t understand it. I try to give deep insightful analysis but also try and make it more palatable so the viewer can understand it. It’s hard, but that’s what I try to do.”

Where does Busquet stand on the issue of commentators being critical of players?

“I would say that I am sure that I have criticized player’s and their play. My general opinion is I don’t try to do it often, and there are two reasons why. Firstly, I think it’s mean and unnecessary. Secondly, poker is a game with many different styles, and people can be thinking of many different things when they are making a play. The people who aren’t as experienced, or as good, I think to berate or belittle them is in very poor a taste so I don’t do that.

Commentary is a privileged position as you get to see some of the best players in the world revel in their art. Who has impressed Busquet the most?

“Clearly the German guys: Philip, Fabian, Tobias, Igor, Max, etc. are very good – there is no doubt about that. Scott Seiver and Mike McDonald have also played really well.

“My hope is that the fields can get a little bit bigger and we can see a few more people. A 30-40-person field instead of a 20-person field. A lot of people talk about 5-10 people who could be the best in the world and that’s a little bit goals orientated, and doesn’t take variance into consideration.

“Then there are the amateur businessman who play these events, and this is a different dynamic. Imagine if it were just top poker players. The whole dynamic would change. The people who would be more successful may be different. There is a legitimate skill in exploiting weaker players that’s different to playing against better players.

“I also have a view that the finances are a little bit vulnerable. People are traveling a lot, you go through periods where things don’t go well, and things can change relatively quickly for people. I am hoping there is enough money to sustain these tournaments into the future.

“I think there are groups of investors who have done really well and hopefully they keep investing. But it’s not obvious to me that the high buy-in model is really that sustainable. We shall have to see if the money continues to flow in.”