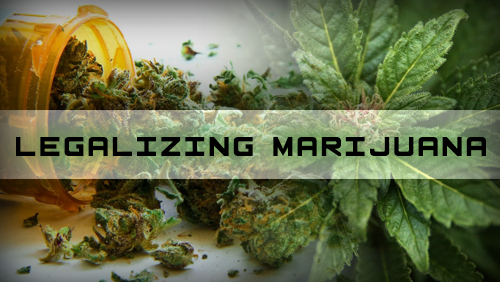 Violence has been a central feature in the the trade of illegal drugs since drugs were first made illegal. From Prohibition in the 1920s to the modern Drug War, there’s been no better way to work one’s way to the top of the trade than by attacking the opposition. Law enforcement has traditionally used this as an argument for keeping drugs illegal, warning that legalization will lead to spikes in crime rates.

In Florida, where medical marijuana legislation is currently being considered, the head of the Florida Sheriffs Association made a typical argument last week. “I see the guy that’s up all night with a baby that’s screaming, so he smokes him a blunt and a half and he thinks that’ll help and ends up bouncing the baby off the walls,” Polk County Sheriff Grady Judd warned. “I see the deputy that has to take the gun from the guy who is passed out as a result of having marijuana and other drugs in his or her possession.”

A number of recent studies and statistics from jurisdictions that are experimenting with legalization suggest that such concerns are vastly overstated. In fact, legalizing marijuana appears to have a positive impact on crime rates, regardless of whether it’s for medical or recreational use.

The effects of recreational marijuana legalization in Colorado have stood in stark contrast to the standard Drug War line. Far from creating spikes in crime, the state’s capital has actually seen significant decreases in both violent crime and property crime since the legalization of marijuana there. Over the first four months of 2014, crime in Denver was down by 10.6 percent according to the city police. There were half as many murders as during the same period in 2013, and two-thirds as many auto thefts.

Statistics in other states that have legalized marijuana for medical use are similar to what’s being reported on the ground in Colorado. A study of FBI crime data by researchers at the University of Dallas showed earlier this year that between 1990 and 2006, a time frame when 11 states legalized medical marijuana, there was no demonstrable increase in most serious crimes. In fact, homicides and assaults actually appear to have dropped over that period after controlling for a host of other social factors.

Perhaps the most interesting study regarding illegal drugs and violence was publicized earlier this month. Judith Aldridge of the University of Manchester School of Law and David Décary-Hétu of the University of Montreal School of Criminology studied the now-defunct Silk Road online drug marketplace and determined that it was “a transformative, as opposed to incremental, criminal innovation.” The two researchers used a web crawler to download the profiles of every seller on the site and the listings for all their wares in September 2013. Then they broke down the previous sales by all of those sellers and analyzed the volume and cost of the drug trade on Silk Road.

Vendors on Silk Road “were effectively able to trade in an environment with many fewer of the risks typically associated with drug markets, including non-payment from customers, theft of product and cash, and violence,” according to the researchers. But what made its effect on violence particularly great was that contrary to frequent comparisons with eBay or Amazon, which sell products direct to consumers, most of the trade on Silk Road was actually between dealers at different levels. The top 20 percent of all sales on the site were for bulk orders of marijuana and ecstasy, which accounted for anywhere from a third to nearly half of a given vendor’s total income. Precursor chemicals used for making various illegal drugs were also available. “Vendors were aware of the uses to which customers were likely to be putting their purchases… (Some) went so far as to offer potential customers step-by-step instructions in drug synthesis. Another vendor specialized only in selling his expertise in drug synthesis in the form of ‘lab notes’ containing production guides and sources for the synthesis of LSD ($925 USD), and for MDA and MDMA ($571 USD).”

By sourcing their supply through Silk Road, upstart drug dealers were able to sidestep the worst aspects of the American illegal drug trade. “Whereas violence was commonly used to gain market share, protect turfs and resolve conflicts, the virtual location and anonymity that the cryptomarket provides reduces or eliminates the need – or even the ability – to resort to violence,” Aldridge and Décary-Hétu wrote. “In the drugs cryptomarket era, having good customer service and writing skills, having a good reputation via ‘feedback’ as a vendor or buyers – may be more important than muscles and face-to-face connections.” With Silk Road gone and its alleged founder still awaiting trial in federal custody, these innovations have mostly vanished into the ether, smaller and short-lived copycat sites notwithstanding.

States that have embraced legalization will continue to produce a trove of data to be studied. So too soon will Uruguay, the South American nation which has become the world’s first to implement a fully legal marijuana market. The hope there, where the government will not tax marijuana at all and will control its sale, is to drive illegal drug cartels out of business by making it impossible for them to compete with the legal alternative, which is slated to cost anywhere from five to ten percent of legal pot in Colorado or Washington. Whatever happens in these experimenting jurisdictions, it seems almost certain to be an improvement on the Drug War’s decades-long enrichment of violent criminal organizations around the world and the law enforcement agencies sworn to fight them.