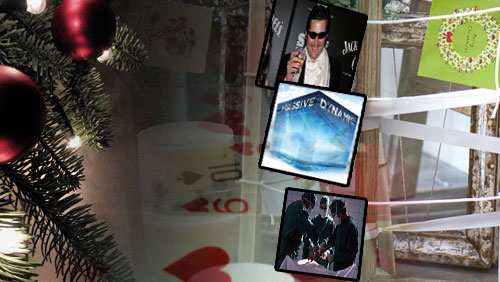 We’re just under two weeks away from Christmas now, which means there’s still time to find the perfect gift for the poker player in your life. If you’re short on ideas – and honestly, who isn’t if they haven’t already covered the floor beneath their tree? – here are a few to consider.

If there’s one thing poker doesn’t have enough of, it’s players clamoring for the spotlight when others have earned their time in it. Thank goodness, then, for this groundbreaking new video game. Pro Limelight Thief 2014 lets you relive key moments in the Hall Of Fame career of one of the game’s all time greats at stealing other players’ thunder: Phil Hellmuth.

You’ll be on hand at the 2002 WSOP Main Event, running your mouth about how you’ll shave your head if Robert Varkonyi wins – and then having it done on TV while the new world champion watches you clown for ESPN’s cameras. You’ll make numerous grandiose, costumed entrances into the WSOP Main Event, upstaging the world’s most prestigious tournament, and crash your stock car in the Rio parking lot. And when Dan Colman wins the 2014 Big One For One Drop, you can rush the stage to welcome him to the poker world – and then figure out to handle it when he later attacks you as a “spineless whore” and a “cancer” (and afterward apologizes for his venom).

With all this action, plus Twitter name-dropping mini-games and a worldwide leaderboard to see how you stack up with the world’s best limelight thieves, being a poker clown has never been this much fun.

Governments around the world have meddled with online poker so much that players from the peak of the boom that it’s almost not fair to call it the same game anymore. Players in an increasing number of jurisdictions can only play with others in their immediate area, killing games and sometimes even running online poker rooms out of business. It’s a trend that’s driven players away and kept new ones from coming to the game, complicating the slow-moving political process of legalization and regulation.

It’s precisely for this reason that international conglomerate Massive Dynamic (whose founder, William Bell, was known to play high-stakes games online) has ramped up its time travel research to help poker players travel back to 2006, arguably the best year ever to be a poker player. Once you arrive back in 2006, you’ll find it’s a one-way trip. And time travel is still pretty bumpy tech, meaning you can’t expect everything there to go exactly the same way as it did in our timeline. Still, the conditions in 2006 are all there for great success for any skilled poker player.

The World Series of Poker Main Event and World Poker Tour Championship both drew record fields that have neither tournament has topped since. Online cash games were a relative breeze to beat for a decent win rate, and a lot of that cash found its way to the tables in the world’s live poker centers. The player bases in Europe and elsewhere hadn’t yet fully developed, making the new European Poker Tour very friendly to American players willing to travel. And satellites to events all over the growing worldwide tournament schedule were cheap and plentiful on the internet. A little bankroll management could take you a long way with this once-in-a-lifetime opportunity.

For the poker player who’s being held back by innate decency rather than variance, this revolutionary surgery will be a complete game-changer. Some of the most successful poker players of all time have been utterly without conscience. I’m not talking about the names you’ll find atop the all-time money list here – if any of them aren’t above board, it’s new. But there are all sorts of role models throughout poker history who show the benefits of not giving a damn whether you’re right or wrong and just going for the money!

If James McManus’ thoroughly researched Cowboys Full is anything to go by, most of the poker players on American riverboats in the early-to-mid-19th Century were dastardly cheats, taking unsuspecting travelers for everything they had – if they could get to them before some the other cheats did. Richard Nixon, who became a Congressman after campaigning with funds won from his fellow sailors, was apparently clean at the table but gave zero fucks about right and wrong once he became president. Jamie Gold tried to back out of a 50-50 deal made with Crispin Leyser before the 2006 WSOP Main Event began, once the prize they were to split ended up being $12 million. And, of course, former world champion Russ Hamilton stole tens of millions of dollars from UltimateBet customers with a superuser account that allowed him to see their cards.

Bonus: without the burden of a conscience, you’ll be fully qualified to work on Wall Street – and, presumably, to find your way into some of the juiciest poker games in the world. Just watch out, because there’s no such thing as a superuser at those tables.