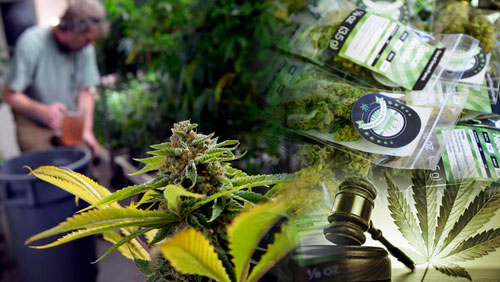 Sometimes it can be hard to remember that humans are making long-term progress toward living in an all-around better society, especially when there’s bad news making the rounds. Thanks to the confluence of politics and circumstance, I regularly see a concrete example of that progress on a smallish but still significant scale, where a break with a harmful status quo has a positive effect not only on my own life but on the society around me as well. I’m talking here about living in Washington state, where the people voted to reform marijuana laws back in 2012.

If Initiative 502 had been passed in some other country, American media might very well describe it “a major progressive social experiment for a conservative society that’s just beginning to take baby steps to break with its violent, racially charged past.” As an American reality, it’s mostly been approached with bemusement in the national media, typical moral panic from conservatives, and kid gloves from the White House. Whatever people outside the state think is mostly about image, though. The reality is that by breaking with the federal marijuana prohibition to pursue a more rational drug policy, Washingtonians who engage in the relatively benign behavior of consuming marijuana are protected in a manner that tens of millions of their fellow Americans can only dream about.

A major change of scenery

This summer I had the chance to move from the prohibitionist Deep South to this new frontier in drug laws, and the surface differences were immediately recognizable. The first retail marijuana sales happened in Washington just before I arrived, and a shop opened in my town within days of me moving this summer. Growing marijuana remains a highly divisive issue in my rural county, with supporters touting the economic impact of the crop and opponents citing every a variety of reasons both irrational and well considered. But there is one local farmer in business here whose operations began early enough to be grandfathered in under a new ordinance requiring pot farms to do their business in industrial zones. (This was a compromise to a proposed total ban on marijuana agriculture in the county.)

The product from the local grower’s early harvests is just beginning to hit the shelves in state-licensed retail stores, including the one just a few miles from my home, which advertises in the local newspaper and gets regular business from a cross-section of both the local community and curious passers-by from either outside the state or elsewhere within it, where retail locations run out of product with relative frequency. For $50 I can purchase two grams of one of the local grower’s strains that originated in the famous coffee shops of Amsterdam. I can drive it home without fear of being pulled over and caught with it on my person, leading to arrest for possession of marijuana. And, of course, I can smoke all of it for my recreational pleasure and return to the shop to buy more, being warned on a friendly government-mandated slip discreetly placed into my bag with each purchase that this product may be habit-forming and illegal outside of Washington State.

Had this entire chain of economic events and exchanges taken place in Tennessee, where I lived just a few months ago, the potential outcomes would have been vastly different thanks to the state’s harsh marijuana laws.

For starters, the grower, who would pay a license fee and taxes to the state here in Washington, would have raised his crops without any kind of oversight by state regulators. He also likely would have had a stash of guns to protect his grow from violent criminals willing to rob him for his black-market goods, like this grower did in a Nashville house that was busted with 230 plants this summer, since he can’t involve the police in his business. Most importantly, he would have been liable for prosecution on felony charges of manufacturing marijuana (up to 30 years and a $200,000 fine), as well as intent to use those aforementioned guns in the commission of more felonies. Altogether those add up to a few potential lifetimes behind bars.

The distribution side of things would have been vastly different in Tennessee as well. What the state of Washington calls a “retailer” and collects taxes from would have been an unlicensed “dealer” there. Instead of buying and maintaining a large inventory of different strains, he would purchase in smallish but still sizable amounts, from an ounce upward to perhaps a pound at a time, depending on the size of his customer base. He would sell his product for about half the legalized price, since he isn’t collecting taxes on the state’s behalf. If he were a dirt bag, he could take advantage of facing no restrictions on selling to minors. And if ever caught, he would face the prospect of felony charges bringing a minimum of one year and a maximum of up to 60 years in jail upon conviction, depending on the amount of weed in his possession.

For myself as a hypothetical purchaser, buying marijuana in Tennessee would have had its differences as well. The product would likely be packaged in a Ziploc sandwich baggie, with no labels full of information like what strain it is, who grew it, when it was harvested, and what the THC content of this particular variety is. And though they would have been mostly out of sight since I’m a white male living in a system unfairly skewed in favor of people who look like me, in my former home state there would have also loomed the potential of extreme life-changing penalties if I were to be caught with marijuana on my person.

Marijuana possession is the most common reason for arrest in the United States, accounting for 42.4 percent of all arrests in 2012, according to the FBI. With a half-ounce or less in Tennessee, I would have faced a misdemeanor possession charges for up to a year in jail and a $250 fine, with the fine doubling for a second offense. For a third offense, I could face felony charges leading to 1-6 years in jail and a $1,000 fine. (If I were caught with more than a half-ounce I would be presumed to have the intent to distribute, raising the possession to a felony charge.)

For the sake of argument, let’s assume that the buds I hypothetically bought came from the Nashville grower busted with the 230 plants this summer, and that my hypothetical dealer bought a single ounce to split up and sell to his customers. In case you’re following along at home and would like to check your tally, in such a case the grower, seller, and I would face a combined potential of 49 years in jail and $414,250 in fines if I’d purchased two grams of marijuana grown in my own neighborhood. All that would be over a final transaction with an untaxed cash value of about $25, for a product which will be consumed within a few days at the very most, with no major side effects other than perhaps a case of the giggles or the munchies. And those figures don’t include related firearm charges that the grower and possibly even the seller might face.

Compare that to a purchase that I can legally make here in my new Washington home, which provides tax money to the state and local government, makes me aware of what I’m ingesting and where it came from, involves no firearms, and leaves nobody in the entire supply chain at risk of serving any time in state prison. The possibilities of federal prosecution remain for the grower and seller, but if that happens the state government will probably be on the hook too and things will suddenly get extremely complicated in a way much bigger than a handful of local businesses.

Life on the forefront

The fact that I can now get high without breaking state law is a wonderful thing, because it’s a very basic kind of freedom. (“If I can’t choose what to put in my body, am I really free to begin with? Film at 11.”) But far beyond the explicit freedom to catch a buzz, what’s truly great about legalization here in Washington is being on the forefront of a more rational, compassionate way of operating one small aspect of our society that has had an outsized negative influence on too many lives for far too long.

Even non-users are better off here than they are under prohibitionist regimes that otherwise don’t affect them at all. For starters, there’s the combined economic and public safety benefit of diverting law enforcement resources that would have otherwise been spent prosecuting thousands of simple marijuana possession cases to combat other crimes. And of course there’s tax money collected on the entire industry from planting to harvest to retail – money that’s never a factor in the black market – that can be set aside for any purpose the people want. (In Colorado it’s going to build schools.)

Surely some aspects of the regulation regime here in Washington will prove less than ideal over time, but as more states legalize (as Oregon and Alaska did this year), the differences in their systems will serve as a laboratory for determining best practices. And in all of them, the citizens who use marijuana will be better off for not having to face life-destroying criminal charges stemming from a federal policy rooted in racism and entrenched in spite of science.

There’s still good news even if you don’t live in Alaska, Colorado, Oregon, or Washington. First, plenty of current and former law enforcement officials are beginning to see the folly in four-decades-plus of mindlessly draconian policies and agitate for change. And even the federal government, overseer of all this misery, has even begun to face the numbers showing just how embarrassingly much injustice the American justice system is content to tolerate. Change may come slowly, but when you look close enough in the right places, it’s getting easier to see.