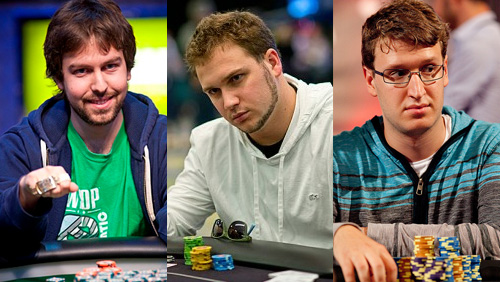 WSOP Day 20 recap sees Pierre Milan create many first by winning his first World Series of Poker (WSOP) bracelet and the first for France; Calvin Anderson hands the poker community exactly what they thought would happen by winning his first bracelet, and Max Silver leads a star-studded final 13 in the $10k NLHE Six-Handed Championship.

Pierre Milan has taken down his first World Series of Poker (WSOP) bracelet, in only his second Las Vegas visit.

It’s Milan’s third cash of the summer, and his optimism is running wild after defeating the WSOP bracelet winner Justin Oliver in a short and shrift heads-up encounter.

“I am ambitious. It’s not over yet, maybe I can win a second one,” Milan told PokerNews after his win.

Back to that final table and Milan had to tussle with some experienced pros.

Justin Oliver was one of the history making Canadians who took gold during 2013. Oliver winning the tough four handed event before praising the part that Jared Tendler had to play in his development.

Matt Salsberg is a former World Poker Tour (WPT) Player of the Year, Jamie Armstrong was making his third final table, and Sam Cohen was continuing a run of form that has seen her final table the APPT Main Event in Seoul, where she finished third, and also final table a side event at the European Poker Tour (EPT) Grand Final in Monte Carlo.

The British pro Danny Laming also came to the final table in fine form after taking second in a recent Venetian Deepstack event for $52,868.

It was the first bracelet for the French at this year’s series.

Another poker player who seems to have transcended from his original position of power, thanks to some smart life choices is Calvin Anderson.

He is, without doubt, one of the most talented poker players on the planet, but his decision to quit drinking, and to focus on a raw food diet has definitely paid dividends this year.

When Anderson entered the final table, the one man he didn’t want to face in heads-up action was Joe Tehan, and when that happens there is only ever one outcome. Anderson v Tehan would be our headline and Anderson would eventually draw better cards than his opponent to win his first-ever bracelet.

It’s Anderson’s third cash of the series, and second final table, in three different formats of poker. Tehan himself was making his second final table of the year and now has over $4.1m in live tournament earnings thanks to this latest cash.

It wasn’t only Tehan who would stand in Anderson’s way. Jimmy Fricke was making his fourth cash of the series; Melissa Burr was making her second final table, as was Ted Forrest, who was searching for his seventh WSOP bracelet.

Anderson picks up $190,538 for the win, and I have no doubt we will be seeing this boy picking up many more awards in the near future.

The familiar face of Matt Stout leads the final 15-players going into the third and final action of Event #31: $1,500 NLHE. With over $2.6m in live tournament earnings, Stout remains one of the most consistent professionals of his generation never to win a major title and will be hoping to change that after so many near finishes.

13-players remain in Event #32: $10,000 Six-Handed No-Limit Hold’em Championship and it’s the in-form British pro, Max Silver, who has the chip lead in a run down that has more stars than the Milky Way.

Event #33: $1,000 NLHE attracted 1,688 entrants and the Brazilian Gualter Salles bagged up more than anybody else with 170,000 chips. Vinny Pahuja, Sean Jazayeri and Dutch Boyd have chips in that one.

Steve Sung won one of the largest prizes in the 44th Annual WSOP when he took $1.2m from the Rio cage after topping the field in the $25,000 NLHE Six-Max event, and he is currently leading Event #34: $1,500 Seven-Card Stud after the first day of action.

30-players remain from a starting field of 345 players and Bryan Campanello, Brian Hastings and Bryn Kenney have chips in that one.