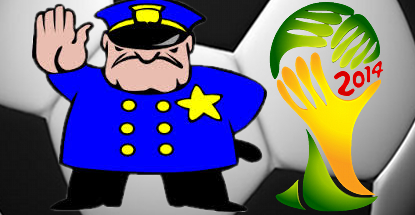 Even before the war on the pitch officially commenced at the 2014 FIFA World Cup, Asian police forces wrapped up their own opening ceremonies and began cracking down on illegal football betting operators. It was 3:30am in Hong Kong when Brazil and Croatia got underway, but Hong Kong police believe the early bird gets the worm. Operation ‘Crowbeak’ launched half an hour before kickoff, swooping down on seven locations across the city and arresting 12 suspected bookmakers, confiscating HKD 208k (US $27k) in cash and seizing betting orders worth HKD 37.7m (US $4.8m).

In Thailand, police have already arrested seven alleged bookies, two betting couriers and 49 unlucky punters. Pol. Lt-General Anant Srihiran, the country’s official anti-betting bigwig, told The Nation that police had also blocked 391 online betting sites based both locally and abroad. Police were actively monitoring the web to ensure that none of the sites relaunched using different URLs. Thai police have said they are focusing their efforts on 40-50 major bookies. About 20% of Thai football wagers are placed locally, the remaining 80% with international bookies.

Thailand’s Anti-Money Laundering Office (AMLO) announced it had frozen 587 bank accounts used for football gambling and other nefarious activities, including drug trafficking and call center scams. AMLO plans to close a further 100 accounts after discovering accounts connected to “about 10” new football betting websites. Pol. Col. Seehanat Prayoonrat singled out Bangkok Bank and Kasikom Bank as being “commonly used by gambling websites to receive bets.” Both banks have been to cut out the funny business and Thai officials will meet with execs from 36 different financial institutions on June 18 to underscore their desire to stamp out illegal wagering.

In Malaysia, police are feeling pretty cocky about their preparations for this year’s football betting explosion. Roslee Chik, chief deputy director of the federal anti-vice, gambling and secret societies department, told the Malay Mail that police were “ready with our equipment for this war … The net is in place … now we’re waiting for the fish to be caught.”

Despite this confidence, Roslee said technology was making the police’s job more difficult, as more bettors were now wagering via smartphones and online. Roslee maintained that police had “learnt from our past experiences and have come up with new ways to bust these people” but suggested “inadequate laws” left loopholes that tied police hands. “The Attorney General’s office should think of new ways … to ease the prosecutions involving gambling machines and foreign-based websites.”