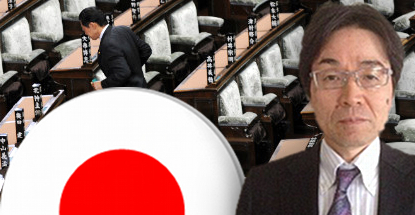 Japan’s casino plans took another blow on Thursday after an opposition politician prevented the casino study bill from being debated in the nation’s House of Representatives.

Pro-casino legislators had hoped to introduce the country’s oft-delayed casino study bill before the current session of parliament ends next Sunday (22). The casino backers didn’t expect to pass the bill this session, but starting debate now would ensure the bill would stand a chance of passing in the abbreviated legislative session that gets underway in September.

On Thursday, Democratic Party of Japan (DPJ) lawmaker Yosuke Kondo (pictured) issued a set of demands to the ruling Liberal Democratic Party (LDP), including requiring that the chief cabinet secretary and other senior officials attend the debate. Kondo, a senior member of a key lower house committee considering the study bill, told Reuters that his intent was to ensure the bill underwent proper scrutiny. Kondo insists he’s not against the ideas of casinos, but this is “a very important piece of legislation” that must be “discussed thoroughly.”

Kondo’s committee is scheduled to meet again on Wednesday, just four days before the legislative calendar expires. Kondo suggested he might allow debate to proceed on Wednesday, but it’s anyone’s guess whether new conditions might suddenly be deemed necessary for debate to start. Kondo’s committee position effectively allows him to stonewall debate on the bill if he so chooses.

The study bill is a necessary precursor to amending Japan’s laws to permit the operation of resort casinos. Once the study bill passes, secondary legislation will be required to work out the nuts and bolts of casino licensing and operation. Casino operators had hoped the study bill would pass this year in order to allow the possibility of opening the country’s first casino by 2020, when Tokyo hosts the Olympic Games, but that timeline looks more ambitious by the day.