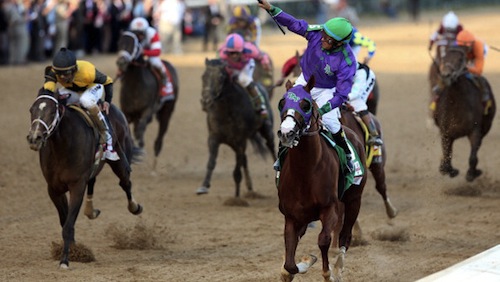 For at least one more year, Affirmed can rest easy. She’s still the last horse to win the Triple Crown. California Chrome had her chance to do it, but like so many other thoroughbreds in recent history, Chrome faltered when it counted the most, losing out on a Top Three finish in the last stretch and seeing Tonalist win the Belmont Stakes.

Leading up to the race, it all seemed that California Chrome had as good a chance as any thoroughbred in recent memory to finally break the 35-year Triple Crown drought. She was riding the kind of momentum few horses have been able to pull off in a long time. Chrome even caught a break when one of her rivals, Danza, withdrew days before the race.

None of that mattered, though, because at the end of the day, the Belmont was defined by a rule that handicapped California Chrome from the get-go. The history books will remember Tonalist winning the race at 12/1 odds, but very few will likely remember Tonalist not participating in the Kentucky Derby and the Preakness Stakes. Those backing California Chrome, especially co-owner Steve Coburn were up in arms over what they deemed a stupid rule, one that allows horses to compete in the Belmont without having competed in either the Kentucky Derby or the Preakness.

To these guys, Tonalist had the advantage of fresher legs compared to California Chrome, who was making her third start in five weeks. It’s a valid argument, even if the way Coburn expressed it left a lot to be desired.

But none of that matters now. Tonalist won the Belmont Stakes and California Chrome finished fourth. Those backing the winner walked home extremely happy, having pulled off a 12/1 coup when not a lot of people saw the proverbial signs.

And to us who have been waiting for a Triple Crown winner for so long? Tough luck, fellas.