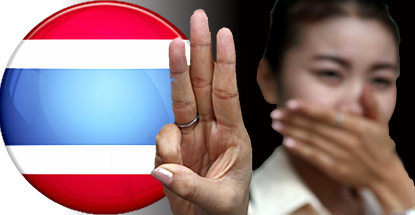 The recent coup in Thailand is helping local authorities uncover illegal casinos, including one that allegedly enjoyed the protection of senior police officials. The Thai army has imposed a strict prohibition against public protests – even via social media – of its having taken control of the government, going as far as to threaten to arrest any group of five or more people giving a Hunger Games-inspired three-finger salute, which protesters have adopted as a sign of defiance against the junta now ruling over them.

Over 100 Thai soldiers recently raided a hotel in Phitsanulok province in the northern part of the country, where it was believed some high-profile anti-coup activists were hiding out. The raid netted no protesters but it did uncover an illegal underground casino in a large hall that had been converted for gambling purposes. Four senior police officers have since been reassigned to other duties while an inquiry is held to determine how such a large casino had been allowed to operate in such a highly visible location.

It’s possible the suspended police officers were able to get a warning through to the casino ahead of the raid, as no gamblers were reportedly found at the scene. However, the soldiers impounded around 200 cars and motorcycles parked outside the hotel and are holding them until the owners can present themselves and justify their presence. The Bangkok Post reported that around half of the vehicle owners had since come forward, 14 of which have admitted to have been at the hotel for the purpose of gambling.

Thai authorities broke up a different hotel casino in Pattaya on May 27, arresting 29 individuals playing Hi-Lo. The Pattaya Mail said the operators had shifted their operations to the hotel after the army imposed a post-coup curfew, which made it difficult for gamblers to get to the casino’s former venue. There was no mention of how many fingers the arrested individuals used to greet the authorities.