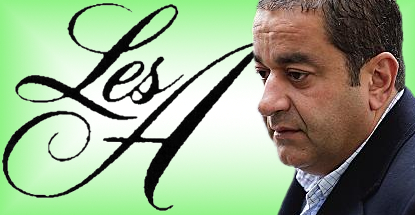 Dubai-based financier Iraj Parvizi (pictured) has sued London’s Les Ambassadeurs casino for £10m based on his claims that the casino failed to prevent collusion at high-stakes poker games. The Daily Mail reported that Parvizi was a regular at a weekly private game at Les A, which attracted poker professionals and deep-pocketed neophytes ranging from Arab sheikhs to football players, including Teddy Sheringham.

Parvizi lost £185k in a single night at Les A’s poker table, then refused to honor his marker, prompting Les A to file suit. Parvizi countersued, alleging that he’d been the victim of collusion between two unidentified poker pros. Parvizi claims that the pros had worked together in urging him to bet ever higher stakes, after which they’d split their winnings. The £10m Parvizi is seeking via his suit is said to represent the total sum he lost at Les A’s poker tables over a four-year span.

Parvizi also alleges that Craig Stevens, who ran the poker game on behalf of Les A, hired a number of masseuses to help the players stay loose. Parvizi claims these masseuses had “opportunities for inconspicuous inspection and signaling of players’ cards to others.”

In their response to the High Court, Les A’s attorneys denied the casino had done anything wrong and characterized Parvizi’s allegations as “embarrassing.” They also questioned Parvizi’s definition of collusion, as goading someone into placing larger bets hardly requires a great deal of forethought and/or teamwork. Regardless, an unidentified high-roller told the Mail that Parvizi was crap at poker – comparing it to a football match between Brazil and San Marino – and thus depriving Parvizi of millions of dollars didn’t require cheating.

Parvizi is a former director of the Aria Capital fund. In 2009, he was one of several individuals charged in the wake of Operation Tabernula, the UK’s largest insider trading investigation. Parvizi has pled not guilty to the charges and his trial is set to commence this September.