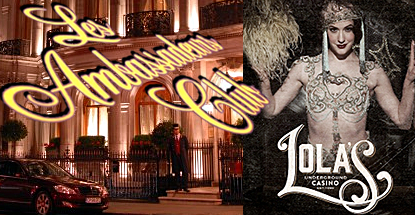 Two central London casinos have recently taken steps to ensure their offering is up to snuff. The Hippodrome Casino in Leicester Square has announced the opening of Lola’s Underground Casino, a subterranean gambling emporium located 20 feet below the venue’s old theater space, featuring dancing girls in tiger cages mere feet from the gaming tables. The new casino takes its name from Lola McGuire, an infamous Hippodrome chorus girl from the Edwardian era known for hosting illegal card games at which alcohol was consumed in quantity. (God bless her.)

The space now occupied by Lola’s was formerly used as a staging area for Hippodrome performers, including animals that would have once occupied those cages. Polly Rae, a burlesque dancer serving as the casino’s creative director, says the close proximity of her troupe of 10-15 performers to the gamblers “creates an atmosphere where everything is sort of happening all at once … It literally is like going through the door to Narnia. The dark, sexy atmospheric energy just transports you.”

Just a stone’s throw from the Hippodrome, the historic Les Ambassadeurs Club was looking to make a clean break with the past. Last year, Les A’s CEO Chris Black decided to jack up the Club’s membership dues by a factor of 50, making the cost of entry a hefty 25k per year. The move caused about 70% of the casino’s existing members to walk away, but Black told the Financial Times that “the purge” was necessary because the aging Europeans and Middle Eastern types that frequented the joint weren’t dumping a lot of dosh on Les A’s tables.

The post-purge void was ably filled with wealthy Chinese businessmen and Black couldn’t be happier. Black has enlisted Chinese chefs and croupiers and brought his non-Chinese staff up to speed on Asian etiquette, while Black and marketing officer Kevin McGowen are making regular trips to China to establish relationships with potential clients. The results speak for themselves: the maximum per hand wager has risen 12-fold to £300k and baccarat turnover in the first four months of 2014 topped £2b, compared to £1.6b in all of 2013. With just eight more years until the next year of the tiger, perhaps Black ought to borrow some of Lola’s cages and fill them with real tigers. But can they dance?