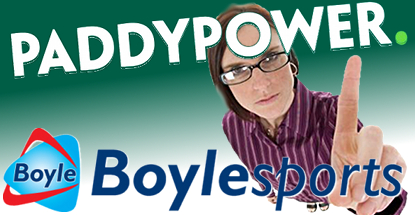 Irish betting operator Paddy Power is set to rollout the mobile version of its Enhanced Price Marketing platform. Already operational for desktop bettors, the platform alerts Paddy punters to custom-tailored price enhancements the moment they log on to their online accounts. The mobile product is expected to get a strong push before next month’s kickoff of the 2014 FIFA World Cup.

Paddy’s head of online sportsbook Darren Lovern told eGaming Review the platform could be used “to reinforce [bettors’] current behavior or to try and drive new behavior.” The platform is a more immediate form of communication than banner ads or email and allows Paddy to “go as segmented as we like” in pimping customized Power Play offers to customers. Lovern said Paddy was waiting until the mobile product is ready before using the platform “in anger,” because “you want the experience across all platforms.”

BOYLESPORTS BOOKIE GAMBLED AWAY €400k IN STOLEN FUNDS ON PADDY SITE
Meanwhile, Paddy is being criticized in its native land after the former manager of a Boylesports betting shop in Cork embezzled nearly €600k then gambled most of it away on Paddy Power’s online sportsbook. Detective Padraig Harrington told the Cork court that Ronan Crowley had stolen from Boylesports on 236 separate occasions over a 22-month period, leading to a total theft of just under €591k. By the time Crowley’s chicanery was detected last September, he’d lost €398k of the funds on Paddy Power’s website.

The Irish Examiner quoted Harrington saying the scale of Crowley’s betting had prompted Paddy Power management to inquire as to the source of his funds. Crowley told them he’d inherited the money, but Paddy decided it wasn’t going to accept any further wagers from him. Harrington said Paddy understood that Crowley worked for Boylesports, yet never contacted anyone at Boylesports to alert them to Crowley’s activity.

Judge Seán Ó Donnabháin sentenced Crowley to five years in prison but suspended the sentence, despite police saying there was ‘zero chance’ of Crowley repaying the stolen funds. The judge saved his harshest words for the bookmakers, saying it “beggars belief” that Boylesports were “so disorganized in their set-up” not to notice Crowley’s nearly two-year crime spree. Meanwhile, the judge said it was “quite extraordinary” that it took so long for Paddy Power to either report or detect the activity of someone they “knew or suspected” was up to no good.