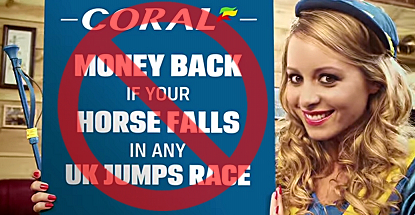 The UK Advertising Standards Authority (ASA) has accused online bookies Coral Interactive of quite literally pimping their odds in a TV advert. The DLKW Lowe-designed Stick One On It spot was accused of linking gambling with seduction, although the ad in question doesn’t appear to have anything to do with seduction, as the presumed object of lust shows no bloody interest whatsoever in the actors representing Coral’s target audience.

The ad features two average blokes sitting in a barbershop discussing which nag they plan to wager on for a horserace that afternoon. Suddenly, the not-at-all clichéd C&C Music Factory anthem Everybody Dance Now blares out and in off the street walks a fetching blonde (pictured) wearing midriff-bearing jockey kit and carrying a riding crop, which she uses to close one of the gobsmacked pair’s slack-jawed mouth. She’s then seen smiling beside a sign pimping a Coral betting offer, then she walks out, pausing just long enough to tap one of the blokes’ smartphones with her crop and switching the TV to a racing channel.

According to complaints received by the ASA, the ad linked gambling with seduction because, um, er, well… frankly, it’s unclear, given that the girl showed no interest in the blokes’ physical selves and they had already previously expressed an interest in placing a wager.

Coral’s defense centered on this fact, noting that the two men’s response to the alleged seductress was to do the exact thing they’d planned to do before they knew she existed. Moreover, it was clear that this woman was about as attainable as the notion of either one of the blokes squeezing themselves into her outfit without rupturing a testicle.

The ASA agreed that betting was already on the agenda, but nonetheless insisted that “the introduction of the [female] character in that manner directly after the men made reference to gambling created a link between gambling and seduction which continued throughout the ad.” Furthermore, the ASA determined that the blokes’ speechlessness was not at the fabulousness of Coral’s offer but because the brazen hussy had been observed “swinging her hips in an exaggerated fashion.”

Watch the ad and judge for yourself whether the puritanical ASA has been swinging its ban-hammer in an exaggerated fashion.