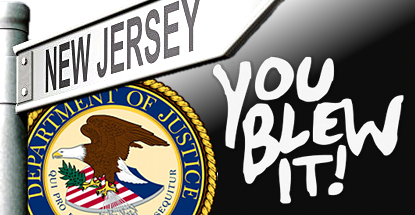 Oh, the irony. Shortly before the issuing of a report that said match fixing is largely the result of governments preventing legal sports betting, the US Department of Justice, the NCAA and four pro sports leagues filed their arguments aimed at convincing the US Supreme Court to block New Jersey from offering legal sports wagers. Lower courts have barred New Jersey from implementing the sports betting legislation Gov. Chris Christie signed into law in January 2012, which prompted the state to ask the highest court in the land to hear its case.

On Wednesday, the DOJ and leagues filed response briefs arguing that the case is not worth the Court’s time. The leagues’ brief calls New Jersey’s sports betting law “a blatant and unapologetic violation of PASPA,” the 1992 federal sports betting prohibition that limited single-game wagers to Nevada. New Jersey’s argument that PASPA violates the US Constitution’s ‘commandeering’ and ‘equal sovereignty’ principles should be rejected because these claims “depend on wresting language from its context” which would “endanger numerous uncontroversial federal statutes.”

The leagues note that when PASPA was enacted, New Jersey declined to join Nevada in being ‘grandfathered’ into the world of legal sports betting, so basically, New Jersey had its shot and it blew it, so shut up. But the leagues go on to say that “there will be time enough for this Court to consider” a PASPA challenge by some other state that was never offered this opportunity, which suggests such a state might make a more sympathetic figure for arguing the feds were unconstitutionally picking haves and have-nots.

The DOJ’s brief also highlights New Jersey’s “free choice not to avail itself” of the opportunity to be grandfathered in along with Nevada, which “should not now provide a basis for a claim of discriminatory treatment.” But NorthJersey.com’s John Brennan offered some two-decade-old local perspective on why the state ‘chose’ not to exercise its grandfathering option.

At the time, the state was in the midst of a gubernatorial election, in which Republican Christine Todd Whitman ultimately unseated Democratic incumbent James Florio. Following the election, which Whitman won by a single percentage point, members of her campaign staff revealed they’d worked with members of the state Assembly to keep the sports betting issue from becoming a ballot referendum. Whitman was apparently afraid that if there was a chance of expanding gambling options, Atlantic City casinos would spend big to get out the vote in Democratic districts.

The Court’s summer recess commences in mid-June, so if that date comes and goes without word on whether or not the Court will hear New Jersey’s Hail Mary, it could be September before the state learns whether the $3m it’s splashed out on legal fees was worth it.