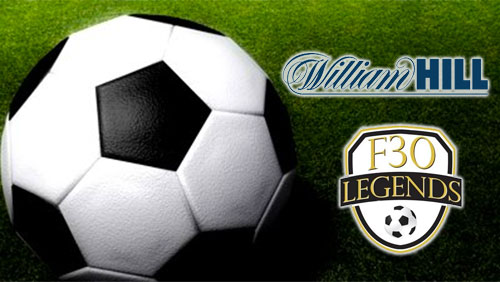 William Hill become the official betting partner for the Football30 Limited (F30) Elite Legends Cup, due to be held at Leyton Orient’s Matchroom Stadium on May 18th.

Do you still yearn to see the likes of Gianfranco Zola, Paul Merson and Teddy Sheringham gracing a football pitch?

Well you are in luck.

Football30 Limited (F30) is a concept that allows the former greats of the Premiership to show the world that there is life left in the not so old dog yet.

Former stars of Tottenham Hotspur, West Ham, Arsenal and Chelsea will compete in the Elite Legends Cup, and the UK’s largest bookmaker, William Hill, have just signed on to act as the official betting partner of choice.

Former England manager, Glenn Hoddle, is the technical director of the F30 framework, and he is responsible for the bulk of the rules that involve 15-minute halves, roll-on/roll-off substitutes and short corners.

“From the very first day the concept emerged over lunch at Langans with Chris Hull, the former sponsorship manager of the England team for Nationwide, I have always envisaged the concept benefiting the like of Paul Gascoigne.  Had F30 been around when Gazza finished playing, then it would have been a smooth transition into the Legends arena, something for him to extend his career, to focus, and to keep reasonably fit and healthy.” Said the journalist, and former British sports writer of the year, Harry Harris

Commenting on the partnership, Glen Hoddle said, ‘We recognize that there are a lot of supporters who like to place a bet and to bring that to our legend tournament will mean we are catering for everyone.”