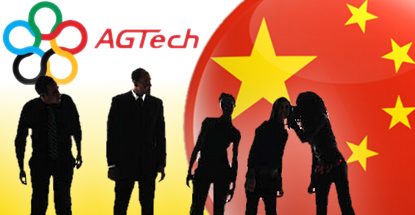 AGTech Holdings Ltd., the leading supplier of terminals for China’s sports lottery market, reported declines in both revenue and profit in Q1 as it continued to transition its focus from lottery management to gaming technologies. Revenue and profit fell to HKD 25.7m (US $3.3m) and HKD 12.3m ($1.6m) respectively, reflecting the lottery management contracts that expired in April 2013. But the company says its new e-Ball virtual sports lottery business has “experienced meaningful improvement” since its launch in Jiangsu province in November. The e-Ball Lottery, along with the Lucky Racing virtual sports game, is operated by AGTech subsidiary AGT, a joint venture with UK bookies Ladbrokes.

AGTech was one of the companies whose stock suffered a sharp downturn this week after a Chinese news agency reported that all online lottery businesses in China were operating illegally. Sanity was eventually restored after China’s Ministry of Finance clarified that two companies – including Shenzhen-based 500.com – had been authorized to sell sports lottery tickets online. But by that point, AGTech shares had fallen more than 20%. This selloff was all the more irrational given that AGTech doesn’t actually conduct online lottery sales in China.

That’s not to say it doesn’t want to. At the iGaming Asia Congress in Macau this March, AGTech CEO John Sun said mainland regulators were poised to issue new guidelines for online and mobile lottery sales. Sun suggested online scratch cards could be among the new products allowed into the marketplace, making 2014 a “crucial and very important” year for expansion-minded companies like AGTech.

Last year, total lottery sales in China hit RMB 309.3b, of which around RMB 42b (13.5%) came via online sales. That represents an 82.6% gain over online sales in 2012, according to Su Guojing, founder of lottery consulting website xueqiu.com.

Total lottery sales hit RMB 32.87b (US $5.3b) in March, up 20.3% year-on-year. Welfare Lottery sales were up 19.4% to RMB 18.75b while Sports Lottery sales were up 21.3% to RMB 12.12b. Total sales in the first quarter were up 15.9% to RMB 80b. Lottery participation in mainland China is estimated at around 7%, while rates of 50% are common in other countries, leaving plenty of room for growth. However, the illegal lottery market is estimated to be 20 times the size of China’s legal market.