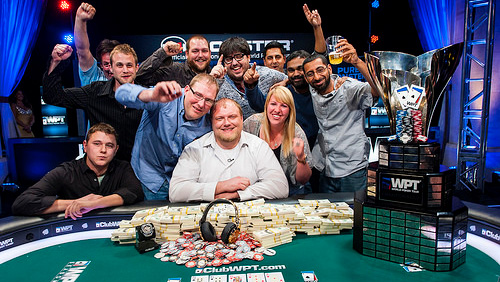 Season XII of the World Poker Tour (WPT) has come to a close and Keven Stammen rounds things off with an impressive victory at the $15,400 WPT World Championships.

A timetable clash with the European Poker Tour (EPT) Grand Final didn’t help matters, but the WPT World Championships still attracted 328 of the finest players in the game, and so it was no surprise that it should end with such a great final table.

It only took nine hands before the wick was lit on the first rocket.

Ryan D’Angelo getting it in with pocket kings against the [As] [Qs] of Abe Korotki; an ace on the flop threatening to spoil the D’Angelo party, until he hit his two outer on the river to survive the first scare of his final table.

That hand left Korotki with the short stack and it was D’Angelo who returned to finish off the job he had started just hands earlier. Korotki getting it in with [Ac] [7c], against the [As] [Js] of D’Angelo, and the best hand held to send Korotki out in sixth.

Fifth place was reserved for Curt Kohlberg and it was Byron Kaverman who was holding the bloodstained axe. Kohlberg moving all-in from the cut-off, holding [Kd] [Jd], and Kaverman making the call on the button with a pair of sixes.  Just like Korotki, moments earlier, Kohlberg would come from behind to hit a jack on the flop, and then – just like Korotki – the two-outer appeared in the river and Kohlberg was out.

A quarter became a trio when D’Angelo’s tournament finally came to an end.

D’Angelo losing a crucial all-in against his good friend Tony Dunst before shipping it in from the small blind, holding [9s] [5c], and Kaverman made the call with [Qs] [2c] – a call that was good.

The recent addition to the WPT Champions Club fraternity, and host of the Raw Deal, Tony Dunst, was the next to be eliminated in third, and it was Stammen who took that particular scalp to enter the heads-up phase with a significant chip advantage.

Dunst placing his final stake into the ground with [Ac] [2h] and Stammen calling with [Kh] [6h]; a king on the flop, and a third king on the turn ending any hopes Dunst may have had for his second WPT title of his career.

Stammen entered his heads-up encounter with Byron Kaverman with a 10,950,000 v 5,505,000 chip lead and despite Kaverman clawing the it back to even stevens, Stammen would eventually overcome his opponent.

The final hand of the season was Kaverman getting it in with pocket fours, against the [Ac] [8s] of Stammen, and an ace on the river secured the title for Stammen to take his total live tournament earnings to over $3.5m, and increase his lead in the Global Poker Index (GPI) 2014 Player of the Year race.

It was a great victory for Stammen, but when it comes to consistency there was one winner in Season XII and that was Mukul Pahuja.

Pahuja didn’t win a WPT title in Season XII, but he did have a series of amazing results that included five cashes, three final tables and two heads-up battles for the title.

Pahuja took $1.4m from the season and takes over the honor bestowed to Matt Salsberg in Season XI.