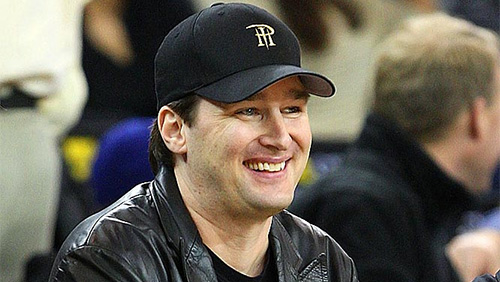 The news that Phil Hellmuth is to star in a Carl’s Jr ad is great news for a poker industry that needs to move into the mainstream if it’s going to continue to grow.

Cool pic from the set of my National Television Commercial shoot for Car’s Jr this morning in LA.

You may think that this little tweet is just another narcissistic social media message that seems to leak out of all of us these days, but it has quite an important impact on our poker community.

The press seems to be awash with news of a declining poker industry at the moment.

The New Jersey online poker launch has not proven to be as exciting as we all hoped it would be, and worldwide online participation is down and dropping.

Just look at the recent numbers that turned out in force at the World Poker Tour (WPT) Seminole Hard Rock Poker Showdown, and the huge turn out for the European Poker Tour (EPT) Barcelona event earlier in the season.

But we do need a different approach if we are going to continue to grow, and Phil Hellmuth and Carl’s Jr. has the answer.

In a recent discussion with Living it Loving it CEO Dave Brannan, he told me about how important it was for poker to start to be recognized and backed by some of the world’s biggest companies, instead of our continual relationship with gambling entities.

Whilst poker and gambling go together like beef and mustard, there is a need to be cute about our relationship when presenting ourselves to the wider world.

Gambling is still seen as the eighth deadly sin in most quarters of the world and this doesn’t help poker’s identity. We get saddled with the bad boy image when we need to be a little more clean and sterile for the rest of the world to want to play with us.

Hellmuth is a great example of how to do this. This is the man who had his head on the outside of a can of Milwaukee’s Best Light and Milwaukee’s Best Ice, and now has photos of him chowing down on a big fat juicy Carl’s Jr. burger.

Then you have the recent partnership with Monster, the news that the winner of the WPT World Championships will receive a Hublot watch thanks to a sponsorship deal with the famous watchmaker, and a connection with the Tiger Woods Foundation.

PokerStars and the European Poker Tour (EPT) are also on side with deals struck with the Swiss watch manufacturer Slyde, Shamballa jewelers, and top notch sponsorship deals with top sports figures, both new and old, with Rafael Nadal, Ronaldo and Boris Becker standing out as faces who the whole world recognizes.

Victoria Coren Mitchell’s recent victory at EPT San Remo is another great example of how a high profile individual can attract more attention to poker than any carefully articulated marketing plan.

When Coren Mitchell became the first-ever two-time EPT Champion the UK journalistic world had her name up in neon lights in virtually all of the major news outlets.

It wasn’t the fact that she had won two EPT titles that excited them. It was the fact that a UK broadcaster, writer and television celebrity had won a poker tournament.

If we are to turn the tide.

If we are to attract more players into the game.

Then this is the way to do it.

To attract the right crowd we need to start hanging out with the right crowd, and slowly, but surely, poker is starting to meet a lot of new friends.