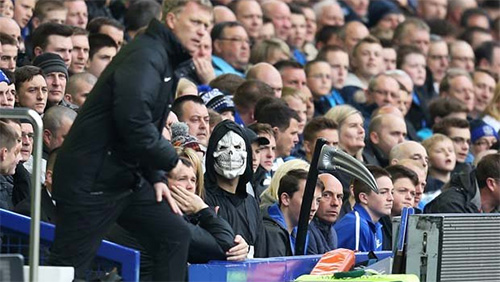 Paddy Power pull Grim Reaper stunt at Goodison Park as David Moyes receives a frosty reception on his return to his old club, and the Irish funsters open a market on the killer of Eastender Lucy Beale

The Paddy Power marketing department has lost its controversial edge this week with the Manchester United manager David Moyes, and Eastenders character Lucy Beale, the targets of some softer advertising.

A Paddy Power t-shirt wearing grim reaper was positioned just a few yards away from the Manchester United dugout when David Moyes returned to Goodison Park for the first time since making a complete mess of the job at Old Trafford.

A Paddy Power spokesman told the Mail Online: ‘It’s gone from bad to worse for David Moyes this season, which means the Grim Reaper could be looking to call time on his Old Trafford career.’

However, the stunt backfired when Everton stewards escorted the grim reaper out of the ground midway through the first half.

Moyes was greeted with a chorus of boos when he returned to the club he managed so effectively for the previous 11-years, and his old team poured more misery on a United team when they cruised to a 2-0 win.

The defeat now means that United have lost 50% of the games they have played in 2014.

Now that’s just not good enough, and perhaps it’s one of the reasons that he is 1/7 to be the next Premiership manager to leave his post at Betfair.

She’s not exactly J. R. Ewing, but Paddy Power think there is enough mileage in the Who Killed Lucy Beale? storyline to open a market on who the murderer will be.

Lucy Beale, played by Hetti Baywater, was murdered during Friday night’s episode and Paddy Power have offered odds on 30 of the cast of the long running soap opera that will celebrate it’s 15th birthday next year.

But not everyone is getting as excited as the boys in green.

According to The Sun, 200,000 viewers switched the show off before the murder had even taken place when the show aired on Friday night.

Max Branning is the current favorite at 2/1, but you can odds as wide as 50/1 for luminaries such as Dot Cotton (death by cigarette end anyone?)