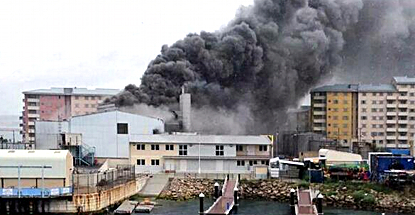 Online gambling companies based in Gibraltar were knocked offline Sunday after a fire engulfed the British Overseas Territory’s main power station. Companies such as Betfred, Ladbrokes, Stan James, William Hill and Bwin.party all experienced service interruptions following the fire, which broke out around 1pm following a fuel tank explosion.

The fire was brought under control about four hours later but thousands of the area’s residents were left without electrical power and the Rock’s main telecommunications firm Gibtelecom is struggling to reboot its circuits. At present, there are no reported casualties from the incident but thousands of residents – including betting staffers – were required to evacuate the area.

Except for Betvictor, which has its own backup generator and was therefore unaffected (comparatively speaking) by the day’s events, the technical snafu wreaked havoc with most Gibraltar-based companies’ ability to take wagers on Sunday’s English Premier League matches. As this is being written (around 8pm local time), William Hill’s Twitter rep was saying staff had been cleared to re-enter their offices but while support teams were working hard, all services were still offline. Betfred reported all services were down while Bwin.party reported that power was back on at its data center and that it was attempting a controlled start of its infrastructure.

That said, Bwin.party’s online woes may not end with the reboot of its systems. On Thursday, a poster on the AffiliateGuardDog forum noted that Google searches for many Bwin.party sites — Bwin.com, PartyPoker.com, PartyCasino.com, etc. – were no longer returning results for these domains, Much like the recent situation involving US-facing sportsbook BetOnline, Bwin.party-related searches return plenty of sites referencing the Bwin.party domains, but not the domains themselves. As with the BetOnline situation, it appears that Google’s gatekeepers have imposed a search engine penalty on the Bwin.party domains, presumably for dodgy link-building tactics. (Nobody tell Jason Ader, okay?)