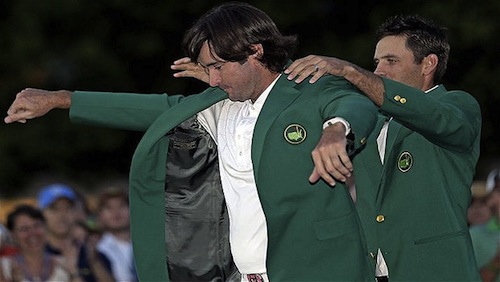 His name may evoke some giggles from a lot of people. But his golf game certainly ain’t no laughing matter.

The man who calls Bagdad, Florida (yes, there’s such a place) cemented his place in Augusta lore with a fantastic final round on Sunday, shooting 69 to pull away from 20-year old prodigy Jordan Speith to claim his second green jacket in three years. Not to bad for somebody who, by his own admission, is just “trying to keep [his] tour card”.

It wasn’t a scintillating final round by any stretch of the imagination. He didn’t even have to hit that crazy looper from the trees in that sudden-death playoff with Louis Oosthuizen in 2012. This time around, Watson was just the steadiest of the leaders, especially in the back nine when he saw one contender after another drop out of the race with their own costly mistakes. Watson though, kept his cool and by the 18th hole, there was no title to chase, just a golf ball to sink into a hole to etch his name in the record books.

He already had it in the bag and like a true champ, Watson calmly sealed it with his putting game that has been on point throughout the tournament. Other than a ridiculous second shot on the 15th hole that had a stratospheric degree of difficulty, Bubba spent the back nine of the final round steadily pulling away from Spieth. No frills. No drama. Just Bubba doin’ work.

It’s not the most exciting of styles but it’s also one that looks like it’s tailor-made for a course like Augusta. And if you’re thinking otherwise, Bubba Watson, the same guy who entered the tournament at 25/1 odds, will be more than happy to show you his closet.

Don’t worry, for a man who apparently doesn’t have any fashionable couture, it should be easy to spot those two green jackets.