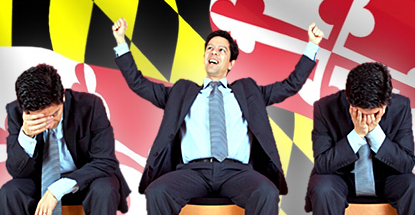 First, the good news. Maryland’s four casinos earned $77.9m in gaming revenue in March, a new monthly record. Excluding Rocky Gap, which opened in May 2013, the year-on-year tally for the other three gaming joints rose a healthy 27.3%. As usual, Maryland Live! demonstrated why it deserves that exclamation mark in its name, claiming $61.2M of the total pie, up 38.5% over the same month last year. Hollywood Casino Perryville earned $7.9m (+16.5%) while Ocean Downs brought in $4.2m (+5.3%) and Rocky Gap brought up the rear with $4m.

Now, the bad news. Maryland is about the only state in the Union in which casino gaming revenues are on an upward trajectory. The Pennsylvania Gaming Control Board has yet to reveal the state’s table game figures for March, but slots revenue at the state’s dozen casinos showed an overall 5.7% decline to $216.2m. Taking out the Lady Luck Casino, which only opened last July, and the decline was actually 6.7%, although that’s an improvement over February’s 7.5% decline. Last year saw Pennsylvania record its first annual casino gaming revenue decline since the state launched its market in 2006.

Continuing the ‘things are tough all over’ theme, gaming revenue at Ohio’s four casinos dipped 5.6% to $79.6m in March. While all four casinos suffered declines, the Hollywood Casino Columbus came closest to positive territory, slipping 0.9% to $20.8m. The Hollywood Casino Toledo fell 2.2% to $17.4m, the Horseshoe Cincinnati slipped 4% to $20.2m and Cleveland’s Horseshoe tumbled 13.1% to $21.3m.

If you watched last week’s episode of Vice, you might start wondering when Michigan’s scrappers will start brazenly digging the copper wire out of the walls of Detroit’s three casinos. The city’s combined casino gaming revenue was down 7.3% in March to $124.9m. The revenue figure for Q1 2014 is down 5.9% over the same period last year, greater than the 4.7% full year decline recorded in 2013. The city is hoping the increased decline is due to the hellacious cold snap the region endured this winter, because the city depends on that casino tax revenue. In March, the bankrupt city won a crucial concession in its debt repayment talks that spared it from pledging its casino taxes – such as they are – as collateral.

Atlantic City’s woes are well documented but the downfall got a whole new definition of scale this week. Rumors continue to circulate that the Hard Rock International group is circling the fiscally-challenged Revel casino but we’ve yet to hear any purchase price numbers bandied about. On Wednesday, casino union group Unite Here! suggested Revel isn’t likely to achieve profitability until 2024, so its current valuation should rest on the value of its land and hotel rooms, which, depending on whose figures you use, produces a total between $25m and $73m. For the record, Revel cost $2.4b to build. Insert your own punchline.