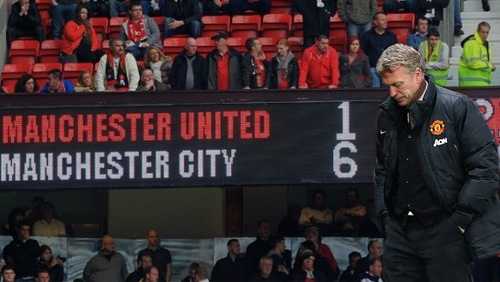 Paddy Power fly a ‘Fergie Back in 6/1’ banner over Old Trafford as the eyes of the nation were on the Manchester United supporters banner that demanding David Moyes leave Old Trafford after their worst Premier League performance in its history.

Who would replace David Moyes should the board listen to a small minority of fans and axe the former Everton coach before he has even got comfortable in the hot seat?

Well, if you wasn’t aware, Paddy Power are offering 6/1 odds on Sir Alex Ferguson returning to the position he held for so many glorious years. Something you will be only too aware of if you attended the home game against Aston Villa this weekend.

The game was being billed as the ‘Moyes Out’ game as readers of the Man Utd fanzine The Red Issue paid £840 for a plane to fly over Old Trafford carrying a banner that read ‘Wrong One – Moyes Out.’

Ever the opportunist, as the world’s media pointed there camera lenses to the sky above the Theatre of Dreams, Paddy Power joined the party with their own plane and banner offering odds on a return for the most decorated manager in the history of the British game.

The stunt comes a few months after the Irish funsters deposited a life size waxwork of Sir Alex outside Old Trafford in a glass case with the words ‘In case of an emergency break glass’.

United went on to win the game by four goals to one after going behind to a 13-minute free kick by Ashley Westwood. Two goals from Wayne Rooney, a first Man Utd goal from Juan Mata and an injury time goal from the super sub Javier Hernandez capping a fine performance for Moyes’s team.

The beleaguered Manchester United boss walked out into the Theatre of Dreams ahead of the two teams and received a warm reception from the fans, many of whom do seem set of giving him more time, and the site of the two banners was met with a chorus of boos by a section of the fans.

Paddy Power is offering 8/1 for David Moyes to become the next manager to leave the Premier League.