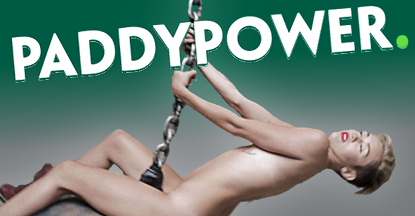 Irish gambling outfit Paddy Power saw revenue rise 12% to €745m in 2013, while earnings rose 5% to €176.9m and profit rose 1% to €137.4m. The always entertaining Paddsters take a unique approach to their earnings reports, which contain observations like H1 sports results going “backwards and forwards like a naked Miley Cyrus riding a wrecking ball” and “if you thought [Wimbledon champion Andy Murray’s] tears were excessive, you should have seen our tennis traders.”

Excluding Paddy’s Australian-facing Sportsbet operations, online revenue rose 15% to €300m, but profits rose just 1% to €73.5m. Sports betting revenue was up 13% while gaming/B2B revenue rose 15% to €125.3m as active customer ranks grew 17% to 1.524m. The online numbers were dragged down by a €16.8m operating loss in Italy, although the company says its .it site is “progressing on-track” following its first full year of operation.

Mobile continues to be a star performer, with Paddy claiming 51% of stakes coming from punters on the go and the company says its new iPad app provides “the best performance from a tablet since Lance Armstrong.” Mobile accounted for 31% of online casino revenue in 2013 and 46% of overall online revenue. The number of active customers still wedded to telephone wagers fell 14% to 71k but phone wagering revenue was up 3% to €22.6m. Despite profits falling 3% to €2.5m, Paddy said the vertical continued to make an “ongoing positive contribution” to the company’s overall product line.

Down under, Sportsbet reported a 28% rise in online revenue to €179.6m, while profits rose 25% to €33.5m. The amount of active customers grew 29% to 419k, and Paddy says 69% of its Aussie bettors placed a mobile wager in February 2014. Mobile accounted for 39% of all online stakes in 2013, nearly double the 2012 figure. Paddy’s Australian online figures include telephone wagering, which accounts for less than 10% of profits but reported a 23% rise in stakes in 2013. Sportsbet’s share of overall Aussie online sportsbook revenue increased 1.7 points to 21.4% in 2013.

As usual, Paddy highlighted its dominance of the social media sphere, claiming to have as many Twitter retweets as its six nearest gambling peers combined. The company says its Facebook fans/Twitter followers grew 55% last year to over 2m, double the size of its nearest competitor. Paddy claims 12% of its customer acquisitions come via social media and that fans/followers were twice as valuable to the company as non-fans/followers.

Looking ahead, Paddy says 2014 is off to a roaring start, with online sportsbook stakes up 19% over the same period last year and retail sportsbook stakes up 6%. Offering a preview of looming tax concerns, Paddy says the UK’s new point of consumption tax, which is set to take effect in December, would have cost the company €37m had it been applied to its 2013 revenues. Had the Irish government’s Betting (Amendment) Bill 2013’s 1% turnover tax been applied last year, it would have cost Paddy a further €7m.