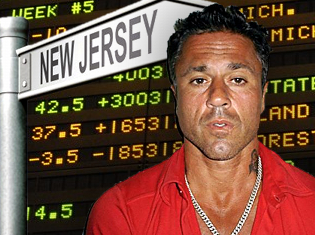 Nevada’s sportsbooks just had their best football season ever, so is it any wonder New Jersey wants in on the action? Nevada’s $111.5m in sports betting revenue would have come in especially handy earlier this week, when New Jersey Gov. Chris Christie was forced to lower his online gambling annual tax revenue projections by $126m.

This month also saw New Jersey beat the deadline for filing its appeal to the US Supreme Court of a lower court’s ruling preventing the state from offering Nevada-style sports betting at its casinos and racetracks. The opposing parties – the US Department of Justice and the major sports leagues – have until March 17 to file their response but it will be months before the Court announces whether it will hear the case. State Sen. Ray Lesniak suggested New Jersey had just a 10% chance of sweet-talking the Supremes but noted that of the cases the Court does hear, 60% are overturned.

New Jersey has argued that all it’s really seeking to do is legitimize activity that’s already taking place. That view is supported by former Gambino crime family member John Alite (pictured) in an interview with 60 Minutes Sports set to air March 5 on Showtime. Alite said he worked as a credit bookie for 22 straight years – some of it in New Jersey – and turned a profit every year. Alite is six years into a 10-year stint in federal prison after pleading guilty to a host of mob-related offenses, including murder, and is cooperating with federal prosecutors in other cases.

Alite said that “gambling is going on anyway,” so why shouldn’t New Jersey get in on the action “if that can help people in the community for their taxes?” What’s more, Alite said an outfit like the Gambinos couldn’t care less about the competition, because however much sports betting revenue Atlantic City casinos earn, “they won’t even put a dent” in the unauthorized betting activity going on.

44WAGER.COM DEFENDANT GETS OFF LIGHTLY
Also having trouble putting a dent in unauthorized wagering is US law enforcement, not that they seem all that intimidated by the scale of their problem. This week saw another sentence handed down in the US Attorney for Connecticut’s case against a Gambino-related sports betting operation that utilized the Costa Rica-based 44wager.com site to process bets. On Wednesday, 53-year-old Silverio Califano was given a 15-month sentence in federal prison, fined $4k and ordered to forfeit a further $40k for his role in the Stamford-based betting ring. Califano, who also ran an illegal poker room in Stamford, pled guilty last May to two counts of operating an illegal gambling business.

Califano got off easier than some of the other 19 individuals charged in the case back in June 2012. In October, local Gambino associates Dean DePreta and Richard Uva were sentenced to 71 months and 46 months respectively. The pair, who each pled guilty to a single count of conspiracy, also forfeited a combined $550k. US Attorney Deirdre M. Daly said the 44wager site earned its operators $1.7m between October 2010 and June 2011.