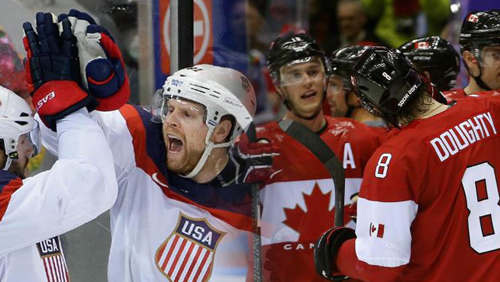 Not nearly as exciting, but no less intriguing.

USA and Canada will face off in the semi-finals of the Men’s Ice Hockey tournament at the Sochi Olympics and you don’t need to be a genius to figure out that the stakes are pretty high for both teams. Win and you get a chance to play for gold. Lose and it’s bronze or bust.

The puck is scheduled to drop at high noon ET this Friday, shortly after the conclusion of the other semi-finals game between Sweden and Finland and if recent history between these two teams are any indication, everyone needs to be in front of their high-definition sets for this one.

As with most previews of this ilk, everything always goes back to one question: who’s going to win?

Looking at it from a sports betting perspective, the Canadians are short favorites to win at 7/5 odds compared to the Americans who are 6/4 to win the game. What does that say? Well, sportsbooks are warming up more and more to Team USA and are becoming a little cold on the previous assumption that Canada, with its superior talent, would just breeze through the competition.

Here’s the thing, though. Based on how both teams have performed up to this point, it certainly looks and feels like the Americans are far more acclimated in this kind of tournament set-up. They’ve dominated all of their games, save for that dramatic shootout win against Russia. There has been constant communication among the guys, plays are being set-up and executed properly, and it just feels like the team is having a ball of a time playing together in the Olympics.

The Canadians, though, have had a different story. It might be sacrilegious to say that the team has been disinterested, but their wins haven’t come by the dominant fashion we’ve come to expect from these guys. Save for the 6-0 trashing of the Austrians, Canada has had to eke out a handful of close wins, including a 3-1 win over Norway, a 2-1 overtime win over Finland, who to be fair, are pretty good themselves, and most alarmingly, a 2-1 win over Latvia. Yep. Latvia. Even Canada’s marquee guy, Sidney Crosby, has had a pretty uneventful Olympics.

Having said all that, Canada is still the team-to-beat for a reason and Crosby, despite his muted tournament so far, is still the best player in the world and just like the gold medal game in Vancouver four years ago, the guy just rises up in the biggest of moments.

If the Americans are going to win, it’s going to take Herculean effort from the team’s young defensive line to stifle what is arguably one of the greatest offensive teams ever assembled. Far easier said than done for guys like Ryan Suter, Cam Fowler, and Kevin Shattenkirk to try and stop an onslaught of high-octane lines from Canada led by Crosby, Ryan Getzlaf, Corey Perry, and Matt Duchene.

With two teams boasting of all that stars on offense, this game could very well come down to defense. That’s where Canada has a distinct advantage of the US, preliminary games notwithstanding. Even with Jonathan Quick behind the net for the Americans, the question of how USA’s defense can hold up against Canada’s all-world offense and give its own forwards room to be aggressive on the other end will determine who plays either Sweden or Finland for all the marbles early next week.

Our money’s on Canada, if only for the simple fact that it hasn’t played its best hockey yet in the tournament whereas it feels like we’ve already seen the best of what the Americans can do.