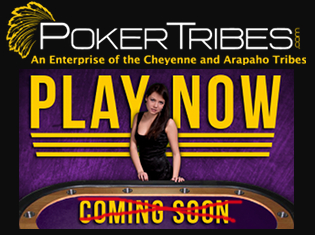 The Cheyenne and Arapaho Tribes of Oklahoma have decided to abort their PokerTribes.com online gambling site as questions swirl around the project’s finances. The PokerTribes site originally appeared in mid-2012 as a free-play site but promising real-money action was in the works. The tribes, which also operate four brick-and-mortar casinos, negotiated a revised gaming compact with the state last April that restricted their real-money online wagering to customers based outside the United States. But federal officials objected to the new compact, which prompted the tribes to file a lawsuit against the Department of the Interior in December.

The Cheyenne and Arapaho are currently struggling with questions over who is really in control of the tribal government. Two rival factions held separate elections late last year, with one group electing Darrell Flyingman as governor, the other electing Eddie Hamilton. While the Bureau of Indian Affairs (BIA) has officially recognized neither administration as having legitimacy to speak for the tribes as a whole, both Flyingman and Hamilton have separately announced the tribes will not be proceeding with the PokerTribes gambling site.

On Saturday, a tribal council meeting authorized Flyingman’s administration to bring in outside investigators to go over the tribes’ spending and to potentially pursue recovery of the $9.4m the tribes paid to Florida-based Universal Entertainment Group (UEG) to develop the PokerTribes site. The Native Times reported that Flyingman also received approval to file charges (if warranted) against the individuals involved in the purchase and administration of the site. The project’s spending had been authorized by the administration of former Gov. Janice Prairie Chief-Boswell, who was voted out of office late last year.

Meanwhile, Hamilton’s office has said it doesn’t recognize the legitimacy of the other administration’s Saturday meeting, but Hamilton stated last week that the tribes “are not affiliated with and are not pursuing any business with PokerTribes.com.” Tulsa World reported that Hamilton has replaced several key casino personnel and an attorney general involved with the PokerTribes’ decision making. Hamilton had also instructed attorney Richard Grellner that “we do not wish for him to represent the Tribes” in the federal lawsuit challenging the BIA’s objections to the new gaming compact.

UEG is run by Iranian-born Florida resident Fereidoun ‘Fred’ Khalilian, who was accused of running a deceptive telemarketing business until the Federal Trade Commission (FTC) stepped in. In 2011, Khalilian agreed to permanently cease his telemarketing operations while admitting no guilt as part of a $4.2m settlement with the FTC. Khalilian also teamed with socialite Paris Hilton several years ago on a failed nightclub operation in Florida that briefly bore Hilton’s name. The Watonga Republican reported that Khalilian’s group had reportedly approached numerous tribes about launching online gambling operations, but the Cheyenne and Arapaho were the only takers.