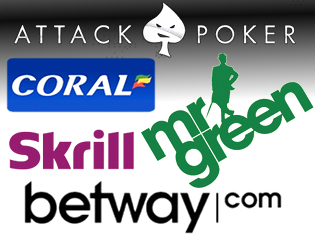 Emil Interactive Games’ social poker site Attack Poker has signed on as the official online gaming partner of the Viacom-owned Bellator MMA mixed martial arts franchise. The multi-year deal officially commences Feb. 28 when Bellator’s Season 10 kicks off at the Mohegan Sun Casino in Connecticut. In addition to the Attack Poker brand getting lots of visibility throughout Bellator live events, broadcasts of the matches will feature an ‘Attack of the Night’ segment spotlighting the best knockout, submission or disembowelment that takes place in the ring.

Over in Ireland, online casino Mr Green has signed on as the main sponsor of the Airtricity League Premier Division’s Bohemian FC. In addition to their logo adorning the club’s home and away jerseys, Mr Green will provide each player with special green versions of their football boots, saving each player about €150 in the process. The green hue happens to be similar to that of Bohemians’ rivals Shamrock Rovers, but Mr Green country manager Gavin Flood said that “when the fans see what we as a brand are trying to do to help their club develop, they will embrace it.”

Online gambling outfit Betway have taken over from snack food purveyors McCoy’s as naming sponsor of the Professional Darts Corporation (PDC) Premier League Darts 2014 series. This year’s event kicked off Feb. 6 and will continue every Thursday until May 22. The deal marks Betway’s first major sports tie-up and exec director Bob Dutnall claimed to be right chuffed at associating his brand with a competition that has become “a top event in the darts sporting calendar.”

Finally, online payment processing outfit Skrill has ended its title sponsorship of the Football Conference just one-third of the way through the three-year term it signed up for in July. The two sides will part company at the conclusion of the current season in May. The Football Conference said the breakup came via mutual consent and that Skrill would now be “aligning any future sponsorship activity to its global strategy” after having “undergone a number of changes” since putting pen to paper. Skrill was acquired by private equity firm CVC Capital Partners just one month after signing its sponsorship deal.