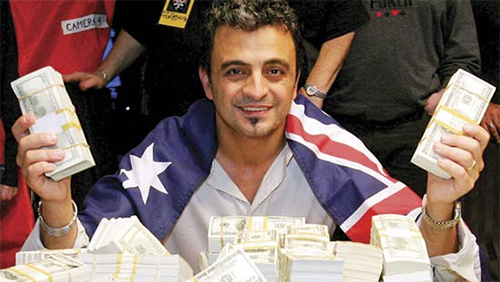 Joe Hachem believes that ‘poker is dying,’ that Jamie Gold and Jerry Yang have ‘destroyed the legacy of the world champion’, and watching the new kids on the block play poker is like watching ‘paint dry’.

Now that’s an invitation to have an opinion I ever saw one.

I start my opinion piece with a look at Joe Hachem and I have to tell you that I don’t have an opinion. The reaction to his Aussie Millions interview with BLUFF tells me that he is not a very well liked man, but as I have never really spoken to him I will reserve judgments.

What I do know is that Hachem has an opinion, and I like that about him. Interestingly, most poker players who have an opinion and are also poker players that draw a lot of negative comments from the world of poker. So, to me it’s no surprise that people don’t like him, he fits the mold.

This is why, as children, we try so hard to fit into the tribe when we are younger. It’s why we are all hammered into shape by peer pressure, and why we behave in ways we know goes against our very being. Stepping away from the tribe brings you unwanted attention, stares and whispers of cockiness and egotism.

Which leads me onto one of the points Hachem was making in his interview – that poker is dying.

That’s his opinion and it’s one that I share and I will tell you why.

We are limiting our potential for growth through our need for instant gratification. We are stuck on a treadmill, expending a lot of energy, but not really going that far.

During my time on the railway…I thought I was being slowly drip fed acid as I just couldn’t fathom the strategy of the company that I worked for. They were hell bent on ripping costs out of the company so the balance sheets looked pretty and fat cats could get fatter by receiving huge year-end bonuses.

Not a bad strategy?

It was terrible actually.

Each layer of cost that we ripped out, hurt both the employees and the customer service. After a few years the fat cats started to get hungry and they looked down at a crew who were getting ready for mass suicide and the backsides of customers who were leaving in their droves to find someone who cared.

It’s the same in poker and a point I was trying to make (very badly it would seem) in my post “Just say NO to final table deal making”. In order for poker to grow we need more players, and this happens through a wider global appeal.

The players in the recent Aussie Millions A$25k Challenge were the fat cats of the railway. They were looking at the short term. There were five superstars of poker, all tired and ready to go to bed, and so they made a deal. I understand why they did what they did. It was plus EV, the players put their own money up, yaddah, yaddah, yaddah.

There wasn’t a winner of an event that has the capability to gain global exposure. It’s like Rafael Nadal and Novak Djokovic doing a deal before the first serve of the Wimbledon final, dropping their tennis rackets and leaving the court.

This is also why Hachem’s point is a very good one. We need ambassadors of poker and the World Series of Poker (WSOP) champion is a great choice because it is one of the tournaments that gains global media exposure.

But we don’t need just one type of ambassador.

The beauty of poker is that it’s a place where players of all shapes and sizes have a chance. Fat, thin, beautiful, ugly, smelly, thick, intelligent, disabled, black, white, female, gay, male, transgender and even orange (if you live in the Welsh Valleys) are all allowed to play.

And here lies the problem.

Negreanu quite rightly pointed out that the sheer numbers that now play in the event means that it is mathematically more difficult for the WSOP to find an appropriate ambassador. Just look at the recent champions and they all share a common theme – youth.

But here is another issue with volume and that’s the sheer number of competitions that we have. It reminds me of my days watching wrestling. There was a World Champion and an Inter Continental Champion. I used to think ‘what’s the point of having two champions’? Now there are four or five champions.

So I even question if the WSOP Main Event holds that world championship status anymore. No strike that. It doesn’t hold that status for me. If we are going to have a true world champion then we need to see investors ploughing some money into the Global Poker Index (GPI) because that’s where our world champion currently resides – not some accountant or spotty kid fresh out of college, but a professional poker player who can beat the very best in the game.

Now let’s imagine my GPI idea worked. A Football Champions League type format. There are youngsters in that mix, so we could end up with a world champion that is a youngster.

So we are back to square one.

One way we could help the youngsters to find their voice is to allow them to have one in the first place. Joe Hachem tells it as it is and he is a douche; Daniel Negreanu speaks his mind and he is arrogant. Gives these guys a break. Let them say whatever they like and instead of throwing stones from your glass houses support them for giving the game you love a voice.

The business end of poker also has a role to play.

Daniel Negreanu is a rare breed. The type of person who could shit in the PokerStars shower room and the CEO would find it funny. There is a reason Negreanu can say what he likes. He has earned his status, he is respected and trusted.

What about everyone else?

They are scared shitless of saying anything because they don’t want to damage the brand. Those youngsters who don’t have a sponsorship deal are too scared to open their mouths incase they say something that shows them in a negative light.

A young kid with a voice. He told the world he thought he was the greatest player in the world and suddenly everyone thought he was a cock. How dare this little whippersnapper declare that he is he best in the world. But he was getting noticed. He was having an opinion and wasn’t acting as if he had a hand shoved up his arse like most of the players in the business.

Negreanu talked about bringing fun back into the game. He talked about commentators becoming dull and boring, and not helping the situation; but the same problems exist for these guys also. They have a responsibility towards the companies they work for, and some of them are scared of what might happen if the commentator suddenly developed his or her own voice. Once again it’s back to the brand.

If you watch a Premier League football game on Sky Sports you will hardly ever hear the commentator directly criticize a player. Never have and never will. Yet if you listen to the same game on TalkSport Radio they tell you how it is. Who would you prefer to listen to? I know who I tune in to. I want to hear opinion. It makes me angry, laugh, smile, shout, go quiet and contemplate.

It’s everything to me…it makes the paint wet.

It’s the same with writing.

Nolan Dalla recently wrote a blog post saying that today’s poker journalism is the best ever. It can only stay that way if we are allowed to have a voice, in the same way that Hachem and Negreanu are allowed theirs, and the same way our new whippersnapper World Champions should have theirs.

Poker hs the ability to be one of the greatest sports in the world, but we desperately need a helping hand. So I have an idea. Instead of creating tournaments with $1m buy-ins and handing out prizes in excess of $20m to one individual, why not use that money to invest into the very foundation of our game.

I am all for charitable causes, but doesn’t charity begin at home?

Where is our sugar daddy?

Come out from behind the curtain and plough your money into poker. Turn it into a brave new world where commentators and writers criticize players for donkey plays, where characters are allowed to show viewers their heart, where emotions drips off every chip, and where a World Champion is born with Hulk Hogan like fan power.