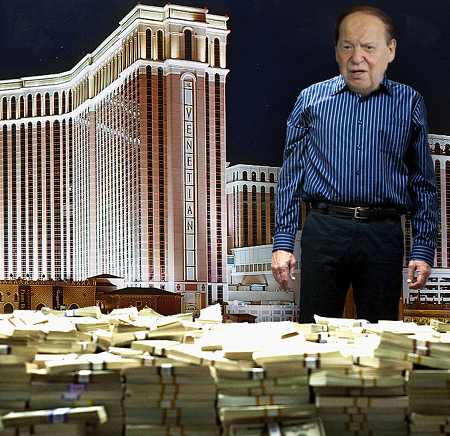 Casino operator Las Vegas Sands saw revenue rise 18.8% to $3.66b and profit up 32.8% to $577.5m in Q4 2013, thanks to continued strength at its Macau properties. For 2013 as a whole, Sands reported record revenue of $13.77b, up 23.7% over 2012 and more than the annual gaming revenue totals of all the casinos in Nevada and Atlantic City combined. Sands’ full year earnings rose 25.6% to a record $4.76b, while net income set another record at $2.4b. Not for nothing did Sands chairman Sheldon Adelson (pictured) describe his company as “the global leader in integrated resort development and operation.”

Sands Macao suffered from gamblers going on a hot streak, with VIP, mass and slots win rates all in negative territory. Despite all this, gaming revenue rose 4.2% to $318.7m, but earnings fell 3.8% to $88m. The Four Seasons Hotel Macao and Plaza Casino saw earnings fall 14.4% to $76.8m, laid low by a 29.5% drop in gaming revenue.

SHELDON ADELSON IS THE ONE WHO KNOCKS
On a post-earnings analyst call, Adelson made it rain for shareholders, raising Sands’ recurring annual dividend 42.9% to $2 per share and issuing his traditional “Yay! Dividends!” cheer. Looking ahead, Sands says the Parisian resort being built on Cotai is on budget and on schedule to open in in late-2015. Construction has also started on the final tower at Sands Cotai Central, which will add a further 700 hotel rooms to Sands’ already market-leading 9k+ rooms when it opens in Q4 2015.

Adelson said Sands’ Q4 mass win in Macau grew 58.3% to a record $1.22b, the fourth straight quarter Sands has outpaced the overall market growth. It helps that visitation from China was up 10% in 2013, and visitation from provinces beyond Guangdong and Fujian provinces rose 15%. The further visitors are from home, the longer they stay in Sands’ hotel rooms; the average stay in a Sands’ hotel room rose from 1.3 nights in 2012 to 2.1 last year. Adelson believes the increased pace of infrastructure development on the mainland will only accelerate this trend.

Adelson – who didn’t so much as mention online gambling during the call – humble-bragged that Sands had the strongest balance sheet in the industry. Adelson described himself as “basically a debt averse person … I don’t want to be in a position where I owe money.” Sands carries $9.76b in total debt, but Adelson says the company could “wipe up every dollar that we owe and more” if it were to sell off only its retail mall real estate for “somewhere between $12b and $14b.” Adelson said Sands was “approaching final approval” from Macau regulators to allow them to monetize the property in this way, so that if the need/desire arises, “all we have to do is pull the trigger.”

Not that there’s any urgency. Adelson said it was just yesterday that Sands’ bean-counters told him “how much cash we had on hand,” which left him pondering the dilemma of having “billions of dollars sitting in the bank wondering what we’re going to do with it.” Adelson said this fiscal strength would serve the company well as it sought expansion opportunities in countries like Japan and South Korea.

Sands COO Michael Leven said Japan’s casino push would likely result in committees being set up this June to prepare locations, regulations and the rules for the furious license bidding that will follow. Leven said there was interest from major Japanese companies about potential casino partnerships, but Sands wasn’t likely to pick a dance partner until legislators finished their paperwork.