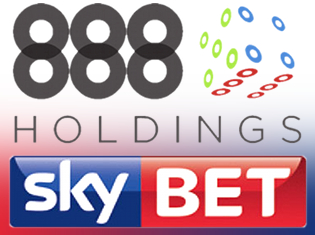 Online gambling operator 888 Holdings finished out 2013 on an up note, reporting revenue up 10% in Q4 and up 7% for the year as a whole. The final quarter of 2013 was an eventful one for the Gibraltar-licensed 888 as the company launched online gambling operations in both Delaware and New Jersey, making 888 the only firm operational in all three US states that have passed intrastate online gambling legislation. 888 has declined to explicitly break out its US earnings into a separate column, but Panmure Gordeon analyst Simon French called the firm “well positioned to capitalize on further state regulation,” even if “evidence of profitable progress in the US is limited.”

SKY BET ENJOYS MOBILE BOOST
Alderney-licensed Sky Betting and Gaming reported revenue up 27% in its fiscal H1, topping £84m in the six months ending Dec. 31. Operating profits at the BSkyB subsidiary were up 25% to £25m as unique user ranks grew 15%. Managing director Richard Flint told eGaming Review that the company’s introduction of seamless login for its mobile apps “has certainly worked” in boosting cross-sell between the Sky Bet and Sky Vegas verticals. Flint also said the November revamp of its Sky Poker software has “led to year-on-year growth which we haven’t had for a couple of years” and Flint expected “even stronger growth” when Sky’s new HTML5 software is adapted for tablet and mobile use.