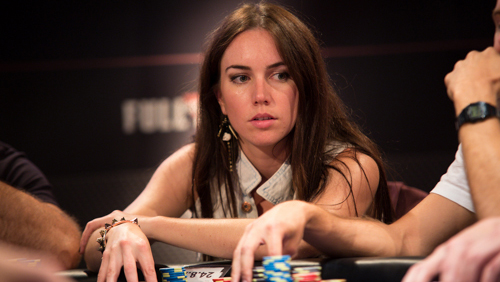 When I last spoke to Liv Boeree she was quite chipper.

The PokerStars Team Pro had just won a satellite to qualify for the World Poker Tour (WPT) Prague Main Event, and despite the obscurity of the event, that winning feeling that she last felt during her European Poker Tour (EPT) San Remo success had returned.

It’s simmering and you feel it won’t be long before it bursts.

It’s been a decent start to the year for Boeree.

A 50th place finish at the PokerStars Caribbean Adventure (PCA) – good for a $32,000 cash – and she has very nearly walked away with a United Kingdom & Ireland Poker Tour (UKIPT) title after finishing in second place at Edinburgh.

The man who stopped her from beating 426 hopefuls was Dean Hutchison who triumphed after rallying back from a 2:1 chip deficit to take the £93,900 first prize – his largest live tournament victory to date by a country mile.

Boeree entered the heads up phase of the match with a 5.32m to 3.045m chip lead, after eliminating Jason Beazley in third spot, and it felt for all the world like she was going to add a UKIPT title to the EPT title she won so dramatically in San Remo back in 2010.

The Red Spade ambassador was just one card away from victory only to see it cruelly taken away from her after the most heartbreaking five community cards of her career.

Boeree opened the action to 175,000, Hutchison moved all-in for 1.7m in chips and Boeree called. It was pocket kings for Boeree and [Ah] [4d] for Hutchison. So Boeree needed to fade an ace – which she did – but Hutchison would hit a wheel on a [7d] [5d] [2h] [Jd] [3c]. A quite horrible river card, and one that Boeree never recovered from.

The pair would continue back and fore for another thee hours until the death knell finally sounded.

It was [5c] [3c] giving Boeree second pair and the open ended straight draw, and Hutchison held the lead with [6s] [5d] for top two pair. The [Kc] and [8d] finished off the action and Boeree was left with a case of ‘what might have been.’

Hutchison was left facing the flash of the camera.