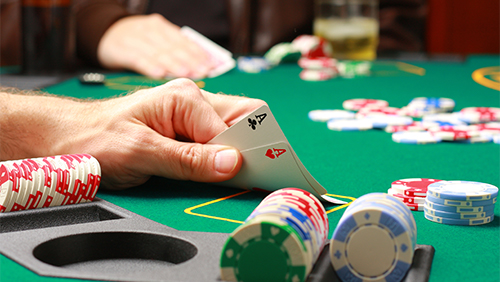 Some poker TV shows are enjoyable because they bring the game to life. Others feature poker as an aside, a cameo part in a Hollywood movie that works to develop the characters in question or sometimes fails miserably.

The TV show we’re featuring in this week’s Poker on Screen article is a show dedicated to the game, the UK & Ireland Poker Tour, or UKIPT for short. The UKIPT was a little brother or sister show to the slick, polished, glossy neon lit world of the European Poker Tour. But was it even better? Let’s dig behind the scenes and find out.

On screen between the years 2009 and 2016, the UKIPT gained what you could say was a cult following, and this reporter was among the many devotees turning up to watch. The poker action was a degree lower in terms of quality than the European Poker Tour due to the buy-in, the set might have creaked a little more than its European counterpart, but the show itself was every bit as watchable, and there’s one major reason for that.

It’s no exaggeration to say that Nick Wealthall is one of the funniest TV presenters ever to speak about poker. There are several others who have more experience at the felt, there are dozens of others who came before him and did a good job. But looking back at Wealthall’s work in the early years of the UKIPT, it’s no exaggeration to say that to many fans, he’s missed in the current glut of poker coverage, and especially on television.

Here are just a few of his best bits from a series which always had its tongue firmly in its cheek.

The UKIPT had several sub-plots which made it a real thrill to watch. Thanks to no little skill and some entertaining playouts, many of the young, entertaining players who won early UKIPT Main Events such as Season 1 winners Joeri Zandvliet and Nick Abou Risk would return to conquer again in later series, and with a character such as Padraig Parkinson winning the very first UKIPT in Galway and Jamie Burland and Sam Razavi winning in Brighton and Cork respectively across Series 1 and 2, there was a lot of interesting context in which you could place your favourite players.

Sam Razavi’s win in Cork in particular was a fantastically entertaining final table with a monster suck-out, an incredible bluff and eventually, the crowning of a superb champion who quite literally wore the hat extremely well.

Watching UKIPT back, it has lost none of its charm, and had some comic asides to be proud of between the action at the felt, which was given plenty of gravitas by the aforementioned Wealthall.

They say the greatest way to play farce is with a completely straight face. John Cleese mastered this as Basil Fawlty in Fawlty Towers. By the same token, adding comedy to those making the most important decisions in life has the same effect. Knowing exactly which of each to add to a certain situation takes immense skill and Wealthall has this in spades, clubs, hearts and diamonds. Hell, he has each of the two jokers that come with a deck of cards up either sleeve.

As the UKIPT was eventually allowed to wither and perish by new owners who saw less value in the dramatic context in which the makers of the early series were able to create, so too did the buy-ins lower and the players eventually drift to other live events. It was a crying shame that a tour as entertaining as the UKIPT was allowed to do this. We as poker fans had a show with history, players who had become characters in a serial and a presenter who effortlessly kept the whole hot air balloon in the air by his charisma alone.

The UKIPT almost certainly will not come back and even if it did so tomorrow, it wouldn’t be the same. The memories are enough, they always are… it’s just a shame that there weren’t a great deal more of them.