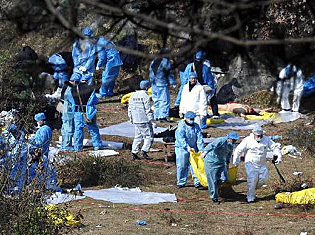 Authorities in China have detained eight individuals in connection with the apparently deliberate bombing of an illegal gambling den in Guizhou province on Monday afternoon. Various Chinese media outlets reported on the blast, which killed at least 15 people and injured eight others who were in attendance at the hillside tent in Longchang township outside Kaili city in the southwest part of the country. Most of the injured gamblers are believed to be in stable condition at the Qiandongnan Prefecture People’s Hospital, but at least one may lose his eyesight.

According to local residents, including relatives of those caught in the blast, the tent was a site to play Gundilong, a box and dice game. Others said the tent had opened for business in the first half of 2013 after moving to the town from a neighboring village. The tent was said to be popular with out of town gamblers, as evidenced by the number of cars that residents reported seeing parked nearby. In December, police in Kaili shut down three illegal casinos, arresting seven organizers and confiscating RMB 210k (US $35k). Macau is the only area of China in which casino gambling is currently permitted.

Initial reports suggested the explosion was manmade, as evidenced by the discovery of what Xinhua reported as a “suspicious crater” of one- to two-meters in diameter underneath the blast site. In August 2012, a Kaili resident complained on a People’s Daily forum that local video game cafés were offering slot machine gambling and other illegal activities but “the authorities are not taking public complaints seriously.”

The idea that the bombing was the work of a fed-up vigilante has police looking to take swift action. The Ministry of Public Security has sent a working team to the area to help with the investigation. Three of the eight suspects in police custody turned themselves in to the authorities, who have asked the local government to step up inspections for any other potential explosive devices, a task complicated by the upcoming Lunar New Year, a popular time for fireworks sales.