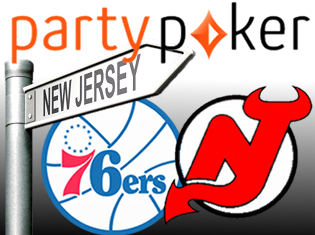 PartyPoker has inked a landmark sponsorship deal with two American professional sports franchises, the first such partnership between an online gambling firm and a US-based pro sports team. An official press conference is scheduled for Thursday afternoon but Scott O’Neil, CEO of the National Hockey League’s New Jersey Devils and the National Basketball Association’s Philadelphia 76ers, let the cat out of the bag on Wednesday. The multiyear, multimedia deal will reportedly involve radio and television advertising, venue signage as well as booths set up at the venues to educate attendees on the steps necessary to open a PartyPoker account.

As initially reported by NorthJersey.com’s John Brennan, O’Neil said the two franchises – which were acquired by hedge funder Josh Harris in 2013 – chose PartyPoker after discussions with several operators currently active in New Jersey’s online gambling market, which officially launched in late November. O’Neil said the talks had led him to believe PartyPoker were “progressive thinkers who are smart and aggressive” and who “understand the power of big sports and of leveraging our brands.”

While New Jersey won’t release official information on how its online gambling market is performing until Jan. 14, scuttlebutt has PartyPoker far and away the dominant performer in the state’s online poker market. News of PartyPoker’s sports tie-up will put even more pressure on Caesars Entertainment – whose WSOP.com product is reportedly running a distant second to PartyPoker – to take action to keep up with the Jersey Joneses. Wednesday’s announcement is also notable for the fact that Devils/Sixers owner Harris is the co-founder of Apollo Global Management, one of the hedge funds that acquired Caesars (then-Harrah’s) in 2008.

MORGAN STANLEY TAKES PARTYPOKER TO THE WOODSHED
The favorable PartyPoker news couldn’t come at a better time, as this week saw market watchers Morgan Stanley downgrade Bwin.party’s ranking based on the widespread perception that the September launch of the revamped PartyPoker software had failed to arrest the once dominant poker site’s long decline. Bwin.party released a late-December trading update claiming its poker vertical’s fortunes had improved, but Morgan Stanley warned that the company’s 2013 withdrawal from many of its so-called ‘grey’ markets means Bwin.party “does not have a steady base of high-quality income from any product or region.”

The brokers also saw a risk of a negative feedback loop, in which “lower marketing spend drives lower active customers, generating less revenue, with fewer funds available to invest in product development and marketing, and that this, in turn, leads to lower customer numbers.” Bwin.party shares fell 3.4% on Tuesday and fell a further 4% on Wednesday to close at 115.9p, well off its Monday close of 125.1p before Morgan Stanley took its belt off.