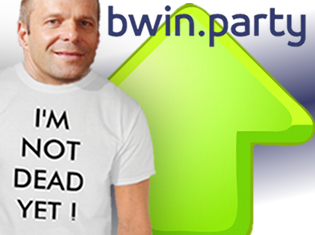 Bwin.party digital entertainment released a positive trading update on Wednesday, possibly intended to convince despondent investors not to top themselves over the holidays. The struggling online gambling firm’s numbers have been dire throughout 2013, but the company now claims the overall numbers in the 11-week period since Sept. 30 have been “in-line with management’s expectations.” Keep in mind that those expectations had already been downgraded by 14% to 17% earlier this year, so the statement really amounts to saying things haven’t gotten any worse. Nonetheless, the mere hint of positivity was enough to push Bwin.party shares up over 8%, closing out the day at 125.4p.

The company claims the launch of its revamped PartyPoker software has “grown” the poker vertical’s revenues, which had been on an uninterrupted downward trajectory all year, so that’s saying something. Sports betting handle was “slightly lower” but margins remain “strong.” The company’s mobile product accounted for around a quarter of sports wagers, barely half the percentages posted by rivals William Hill and Paddy Power, but nearly double what Bwin.party reported a year ago. Also, a new mobile sports product went live in Spain this week and will be rolled out in other markets over H1 2014.

Despite Bwin.party’s New Jersey online product having only been operational for three weeks, the company says the launch has already boosted its casino vertical. The company also cited PokerScout numbers suggesting PartyPoker had staked out a significant liquidity advantage over its closest New Jersey rival, Caesars Interactive’s WSOP.com. But PokerScout also suggested that the market may have already plateaued, given that PartyPoker’s marquee Sunday $50k tournament attracted 173 entrants in its first week, rising to 265 the following week, but flattening out at 269 last Sunday (15). The New Jersey launch is also expected to saddle Bwin.party with costs of between €7m and €10m for the year.

Looking ahead, Bwin.party has high hopes for new mobile products, including iOS apps in New Jersey. The 2014 FIFA World Cup – a tide that lifts all betting boats – will also help boost next year’s bottom line. The company has arranged a new £50m revolving credit facility from the Royal Bank of Scotland to tide it over until things really turn around. Full-year figures for 2013 will be released March 13.

Bwin.party also announced that non-executive chairman Simon Duffy would step down after the company’s annual general meeting in May. Looking back at his three-year tenure at the helm of Bwin.party’s board of directors, Duffy acknowledged the choppy waters the company had endured but expressed confidence in the ability of CEO Norbert Teufelberger (pictured) to see them safely to shore.

Investors were somewhat less convinced. While most concurred that 2013 may well represent Bwin.party’s darkest hour, Peel Hunt’s Nick Batram believes “it is fair to say that management has much to prove and we remain to be convinced about its ability to ultimately deliver. If the current management cannot unlock the inherent value in a business, then someone else could.”