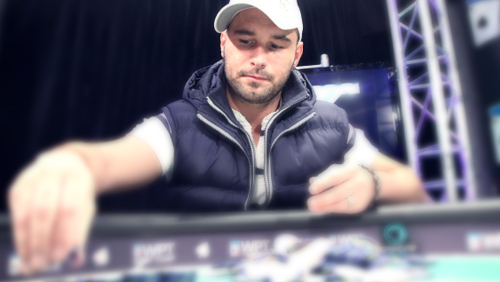 Steve Watts has been pottering about the UK poker scene since 2008, but his game has really started to motor in the past two years, where he has pocketed around $400,000 in prize money as his game shifted from the side events to the main events. That increase in earnings coincided with his decision to concentrate solely on poker after an injury cut short his professional football career whilst playing for Leyton Orient in the football league.

I caught up with Mr. Watts as he traded blows on the felt of the World Poker Tour (WPT) in Prague where we chewed the fat about his football career, his younger days as a model and how he very nearly ended up a pop star!

How did you eventually get spotted?

“When I was younger, my brother and I were both boxers, and then when I was about 15 he went one way and I went the other. I got spotted by Millwall and spent some time in their school of excellence, then Charlton took me on, went to Tottenham, and back to Charlton – all before I was 16.

“Then I got chucked out of school and Charlton wouldn’t give me a YTS so I went printing, for a bit, and did a little bit of modeling and played some non league football. I scored 40-goals one season and could have gone to a few teams, but I chose Leyton Orient and was top scorer for a few years. I nearly got a move to Birmingham but I did my knee and had to quit.”

What are your greatest memories?

“Playing at Wembley in my first season was certainly a highlight. Going from playing in front of 100 people for Fisher to 40,000 at Wembley within four-months was special. It was the play-offs against Scunthorpe and we lost one-nil. I remember how hot it was. It was a dream and I couldn’t stop looking around the stadium. I think it took me about 30-minutes to start running.

“I also scored the winner in the play-offs against Hull to send us into the play- off finals at the Millennium Stadium, but I got sent off in the last minute for doing a dodgy foul so I missed the final which we lost 4-3 to Blackpool which was gutting.

“I also played against Gazza in his last game for Everton.”

Talk about the injury?

“I could have had a move to Birmingham. They turned down £320k because they wanted £500k. They came back the week after and I scored. QPR and the old Wimbledon were also interested. The next game I done my cartilage and was out 3-4 months, came back, found some form and did it again so I had to quit. I was 29-years of age.

“I was gutted. I couldn’t train every day, because it wasn’t strong enough, but I could manage to play non-league and train maybe once per week. I scored 48 goals for Fisher in my first season and I had Cardiff, Swansea, Millwall and Oxford looking at me. Millwall and Oxford made an attempt to sign me, but I told them I couldn’t train everyday because I didn’t have any cartilage. So I stayed non-league because I knew my knee would go again and I didn’t want anymore heartbreak.”

If you had gone for $500k how much of that money would you have seen?

“It depends individually. You can negotiate with the club and you usually get 10%, but you also get relocation fees, expenses and sometimes you can say to the club that you want a signing on fee, but your agent deals with all that.”

“You have your own individual bonuses for scoring goals. So if you get 10 goals or 20 goals you get so much; and obviously per goal rewards. But the win and draw bonuses, FA Cup runs and stuff like that is the same for all players. Defenders get bonuses for clean sheets.”

Who were the toughest players you faced?

“There have been so many. I played against John Terry, Sol Campbell and Leroy Primus…who did my knee.”

You mentioned earlier that you did a spot of modeling?

“I did a lot of kiddie magazines for the young teenage girls. I did some work for Cosmopolitan and some MTV videos. I nearly got into the pop band Another Level. I turned it down for a trial with Charlton…after getting to the last three. I can do a bit of singing and dancing, but they just wanted a model; but I was no pop star.”

If you could choose a life of poker, modeling, pop superstardom or football what would it be?

“Football all day long. You get a buzz through poker but it’s nothing like scoring in front of 10-15k fans each week.”

So how did you get involved in poker?

“I started playing with the likes of James Akenhead, Praz Bansi, the Chattha brothers and Martins. We used to play a little cash game in a place called Guses and I learned from that. Then they all started making chunks and I was thinking, “I won that SNG the other night why can’t I do that?”

“I could never play the main events because of my commitments to football. But there were a couple of midweek side events at things like the GUKPT. I won a £300 & £500 and that year I won about £20k on side events. So when football ended I thought I would try the main events, started doing that, got a little sponsor, won a few quid and started to travel the world getting fat.”