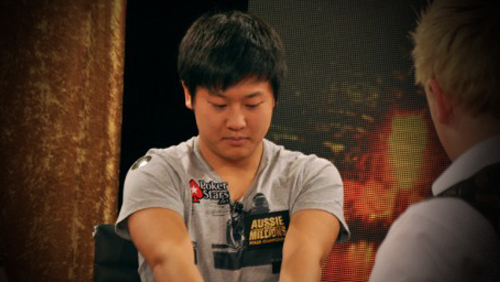 EPT London chip leader, David ‘MissOracle’ Yan, is hoping to grow accustomed to seeing his name dominating the poker news headlines, as he continues his hot 2013 streak with just 15-players standing in the way of a £560,890 first-prize.

45-players started Day Four and the plan was to play five levels, or reach 16-players, and it was the latter that knocked on the door first. Whoever was going to win this thing was going to be a virgin EPT champion after we lost the final four former champions during Day Three, with David Vamplew lasting the longest before expiring in 57th place.

Here is the recap of the day’s events:

Robin Ylitalo’s live tournament career is just getting better and better. A breakthrough final table performance at EPT Campione in 2011 (where he finished 8th), was followed by a fifth place finish at WPT Copenhagen in 2012, and this year he finished sixth in a WSOP $1.5k event and 141st in the main event proper. Ylitalo taking the chip lead early doors after the eliminations of the dangerous Paul Berende: 99 v QJ and Kitty Kuo: JJ v A9.

Stefan Vagner eliminated the man who will forever be known as Viktor Blom’s brother. Sebastian Blom finding the exit after running pocket eights into pocket tens; and Timothy Adams would find the door courtesy of Carla Sabrini before David Yan would replace Ylitalo at the top of the counts with the elimination of Ole Nergard, after flopping top-two on [8c] [7c] [5h] – holding [8s] [7s] – and Nergard holding the world with [Ac] [4c]. The world never came and Nergard was out.

Level 20: The Devilfish is Out

Georgios Karakousis eliminated Dave ‘Devilfish’ Ulliot after the king of the one-liners rolled back the years to teach the kids a thing or two about the great game. Devilfish getting it in good with pocket eights against the [Ad] [3d] of his opponent. An ace on the turn sending those rings to the rail.

Leon Louis is on a heater after his recent final table appearance at the World Championship of Online Poker (WCOOP) Main Event final table where he finished eighth, but Steven Warburton was on hand to douse those fires sending ‘Flippetyflop’ to the rail when his pocket nines won the race against the laggy ace-queen.

Shannon Shorr made the wrong hero call against Javier Etayo to end his tournament life (Etayo had flopped the nuts versus Shorr’s top pair), Yngve Steen eliminated Salman Behbehani: AT v A6, and David Yan kept the pace at the top of the field when he eliminated Jamil Kanji: AA v QJ.

Level 21: Moseley and Watts Are Out

Ludovic Geilich’s is at EPT London courtesy of a bankroll-creating win at the Estrellas Poker Tour in Marbella recently. Geilich picked up $172k for that win, and enabled him to join in the more opulent surroundings of an EPT. The lad is not doing badly either after eliminating Yngve Steen K6cc v AJ when a king rose from the deck on the turn.

At the other end of the charts we lost two great British players in Steve Watts and Andy Moseley. Watts lost a flip against the chip leader David Yan and Moseley was eliminated by the starting day chip leader Martin Kozlov: flush over flush.

Devilfish Misses Out on Poker Hall of Fame; Mortensen & Brunson Are In
Lee Davy
17 October 2016