Live Tournament Round Up sees EPT10 Prague victories for Rafael Nadal, Dmitry Holdeew and Vanessa Selbst; and it’s Tiberu-Florian Georgescu leading the way after Day 1A of the main event.

Once a winner, always a winner. 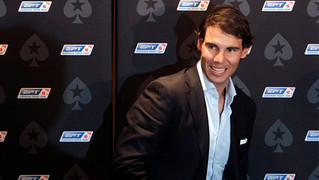 Nadal taking his victory, and €50,000 for a charity of his choice, after defeating de Melo in heads-up action after his [Ah] [Tc] out maneuvered the [Th] [6h] of the former hockey star in the final hand of the contest.

It remains to be seen if we will see Nadal playing in any further events in Prague.

389 players turned up to party at Day 1A of EPT10 Prague and around 219 of them made it through to Day 2, with the Romanian Tiberu-Florian Georgescu leading the way with 191,000 chips.

Snapping away at Georgescu’s heels was the WSOPC grinder Ari Engel, who has good Prague form after making the final table in 2011 when he finished in 6th place. Engel is coming off the back of a recent Heartland Poker Tour (HPT) victory in Missouri and no doubt has the scent of the big money.

Dmitry Holdeew won the largest ever tournament to be held on Czech soil after defeating 1,315 players to take the €226,400 first prize at the Eureka Poker Tour in Prague.

The heads-up battle was a tale of two all-ins. The first giving Barer hope when his pocket eights outfoxed the pocket fours of Holdeew two claw back the chip lead from the German, and the second would be the final hand of the night.

Vanessa Selbst has started her climb towards $9m in live tournament earnings after taking down the €5,000 EPT10 Pot Limit Omaha (PLO) Championship in Prague for €100,700.

It’s the second major side event victory in the past two EPT10 events after defeating Max Silver in heads-up action to take first in the United Kingdom & Ireland Poker Tour (UKIPT) High Roller in London for £67,499.

Selbst defeated a stellar field, of 71 players which included a heads-up victory over Sam Greenwood, and takes her 2013 live tournament earnings over the $2.5m mark, in what must rank as one of the most memorable years of her life.