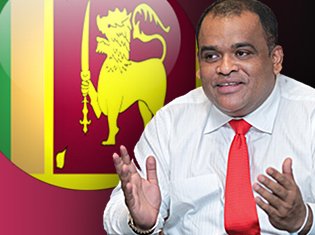 Sri Lanka has announced the signing of a deal to build the third resort-casino in Colombo’s new entertainment zone. Investment Promotions Minister Lakshman Yapa Abeywardena announced that the Board of Investment had reached agreement with local casino operator/politician Dhammika Perera (pictured) to build a $350m integrated resort on 2.5 acres of land at D.R. Wijeywardene Mawatha in Sri Lanka’s capital city.

Abeywardena said the resort project, which Perera has dubbed Queensbury, would involve 80% foreign investment, although Abeywardena offered no details on the source of that foreign investment. The Island reported that Queensbury’s tax concessions, which have proven so controversial with the country’s other two casino plans, have yet to be negotiated.

Perera, who also serves as the country’s Transport Ministry Secretary, operates three of Sri Lanka’s four small-scale licensed casinos: Bally’s, MGM and the Bellagio (none of which have any relation with their Las Vegas counterparts). In order for the Queensbury project to offer a casino, Perera would need to transfer one of the existing casino licenses to the new resort. Sri Lanka’s other licensed casino, operated by Rank Holdings, is reportedly undertaking a similar transfer arrangement as part of Rank’s joint venture with Australian casino operator Crown Resorts.

Perera’s announcement leaves open the question as to who will provide John Keells Holdings (JKH) with the casino license for its $850m ‘mixed development’ project in Colombo, as Sri Lanka’s government has insisted that no new casino licenses would be issued for the projects in the new gaming district. In October, JKH chairman Susantha Ratnayake told shareholders the company was negotiating with two casino license holders, but given Rank’s publicly stated team-up with Crown, Perera really is the only game in town. And with Perera hanging out his own shingle in Colombo, JKH now finds itself in a truly lousy negotiating position.