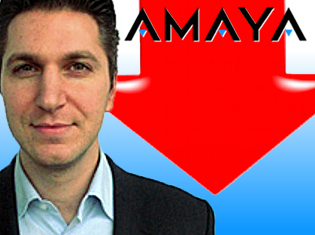 Canadian gambling operator Amaya Gaming Group saw revenue rise 120% in the three months ending Sept. 30, but the lingering hangover from the company’s 2012 acquisition spree resulted in a net loss of $3.47m for the quarter. Revenue rose to $40.2m thanks to a surge in Latin American gaming machine sales via Amaya’s Cadillac Jack subsidiary, which Amaya acquired last November. The 2012 acquisitions of software developers Cryptologic and the Ongame online poker network are also cited as helping boost Amaya’s year-to-date revenue to $115.5m, a 194% bump over the same period last year.

The third quarter was an eventful one for Amaya, including the aforementioned Cadillac Jack deal to place 2,000 gaming units in Mexico over the next 12 to 24 months and Amaya’s deal to supply casino gaming content to Caesars Interactive Entertainment’s online operations in New Jersey. The fourth quarter is shaping up to be equally active, with Amaya’s inking of a New Jersey online casino content deal with Bwin.party, an online poker deal with Betfair’s New Jersey-facing site and an online poker and casino deal with Atlantic City’s Golden Nugget Hotel & Casino. The company also added $70m via the sale of subsidiary WagerLogic to GoldStar Acquisition Co.

Amaya CEO David Baazov described the third quarter as “immense” for both his company and its partners. Baazov characterized the launch of full-fledged online gambling in New Jersey as a “once in a lifetime opportunity” for which Amaya has positioned itself to become a market leader. “Our footprint and partnerships with leading gaming operators and brands also presents us with the opportunity to grow quickly in the US as regulation evolves in other states.”