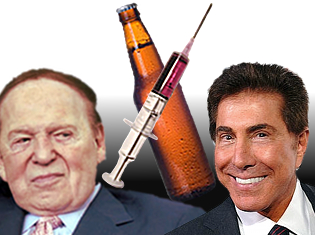 Las Vegas Sands chairman, anti-online gambling curmudgeon and Halloween-orange hair dye aficionado Sheldon Adelson (pictured on the left) called in to Bloomberg TV on Tuesday, apparently irate over their editorial board’s decision to run an op-ed suggesting the United States “should go all in with online gambling.” The Bloomberg editors had opined that this week’s successful online gambling launch in New Jersey was “a victory for fun, liberty and sound fiscal policy” and suggested the rest of the nation “should be so lucky.”

Naturally, the fact that such a prominent media outlet had the temerity to suggest US politicians and gambling regulators might want to pull the cork out was sufficient to release Adelson’s anti-online gambling Kraken. Adelson, who has vowed to “spend whatever it takes” to stuff the online gambling back in the bottle, told Bloomberg that their arguments were all wet, particularly the part about various levels of government enjoying new tax revenue streams: “You can also make the argument for legalizing heroin and cocaine and prostitution.”

As Adelson was making false equivalencies between online gambling and heroin, rival casino boss Steve Wynn (pictured far right) was busy comparing online gambling to sudsy malt liquor. On Monday, Wynn used the unveiling of some sculptures at the Wynn Las Vegas casino to tell reporters that “playing poker is America, and outlawing poker is like the Volstead Act where they outlawed beer.”

While Steve was content to paint the the current Washington, DC anti-online gambling stance as modern day prohibition, Wynn stopped short of a full-throated endorsement of online gambling, saying he was “neither a proponent nor opponent of it.” Wynn Resorts has inked a deal with Caesars Entertainment to participate in New Jersey’s online market – assuming Wynn Interactive eventually gets the nod from state regulators – but the Las Vegas Review-Journal quoted Wynn saying his company had only “put their toes in the water” because he’s “the chairman of a publicly traded company that is required to pay attention to such things.”

Wynn said Adelson’s oft-derided view that online gambling lacks the ability to police its players “resonates with a lot of people” but suggested it was “questionable whether Sheldon will be able to stop it … I just think this sort of thing has a life of its own.” Regardless of whether the US chooses to regulate online gambling at the federal level, “people are going to do it anyway.” Wait… are we talking about gambling, beer or heroin?