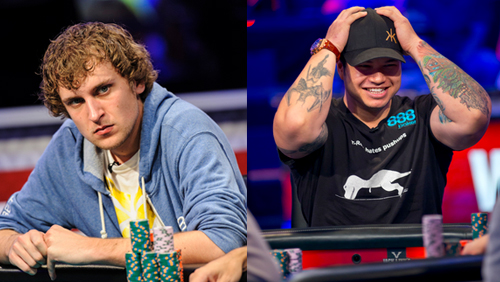 J.C. Tran and Amir Lehavot were the favorites to advance to heads-up play when the final table of the WSOP Main Event began in Las Vegas last night. Nothing went according to plan for either of the November Niners, though, and in the end the table’s youngest player and least experienced player would find themselves the last two with a shot at poker’s world championship. (UPDATE – Ryan Riesse is the 2013 WSOP Champion)

The short stacks didn’t waste any time getting involved, and the rest of the table was prepared to deal a knockout blow, but none arrived in the early going. First Mark Newhouse doubled up when a two-outer gave his queens a pot over Marc-Etienne McLaughlin’s K-K. Then David Benefield got in behind Sylvain Loosli’s K-J with K-9 of spades on Hand #12, but three more spades on the board gave the Texan a much-needed double-up.

On Hand #29, McLaughlin and Lehavot both flopped top pair but McLaughlin’s K-J turned two pair and got paid off by Lehavot and his A-K when the river improved both players’ hands. But McLaughlin soon dropped a big pot of his own when Ryan Riess showed a queen-high flush on the river, moving into second place. All that was prelude to Mark Newhouse’s exit in ninth place on the next hand, when Ryan Riess’ A-K caught a king on the flop and Newhouse’s nines never caught up. With Newhouse gone everyone was guaranteed at least another $211,434.

The other American short-stack left two hands later. Benefield three-bet all-in for 8.5M over the top of J.C. Tran’s 1.1 million opening bet, holding just K-2 of spades, but Jay Farber woke up with A-K and made the call. Benefield was still drawing live to a flush going to the river, but it never came and he left in 8th place. Jay Farber temporarily moved into a narrow chip lead with that pot and a blind steal soon after, but Riess, who had come into the final table confidently predicting a win, took it all for himself in a pot where he raised and then took it down with a five-bet to 11.1M to scare off both Lehavot and McLaughlin and chip up to 45.27M.

That left the table separated into four distinct strata: Riess with 95 big blinds and the lead, Farber and Tran 18 big blinds less than Riess, McLaughlin and lehavot between 45 and 50 big blinds, and the two European short stacks with 18 or less apiece. Michiel Brummelhuis bought himself some breathing room on Hand #53, doubling through Riess with 9-9 against A-Q, and then two hands later picked up the nines again. This time they got him into a blind-versus-blind raising war with Riess, but once his chips were in the middle he saw he was up against Riess’ pocket aces. There was no magic in the deck for Brummelhuis, who left in seventh place and set the new Main Event gold standard for Dutch players in the process.

With that pot Riess’ stack shot up to 111 big blinds, 30 ahead of Farber and 35 beyond Tran. Wearing the #81 jersey of the Detroit Lions’ Calvin Johnson, Riess grabbed several pots and climbed to 64.57M before the blinds increased for the first time at the final table, moving up to 300K/600K. On the other end of the leaderboard, the lone Frenchman at the table began a comeback over 20 hands or so that saw him pass McLaughlin, Lehavot, and Tran to move into third place behind Riess and Farber.

Tran and Lehavot were still in decent shape with 44 and 33 big blinds, respectively, but McLaughlin, who had been on the wrong side of too many of his opponents’ value bets, was behind the eight-ball with just 16 big blinds as the players went to their second break of the night. Lehavot, the seasoned pro and past gold bracelet winner, soon joined him near the bottom after tangling with admitted amateur Jay Farber. Tran soon did the same, with the same result, and suddenly Farber was just behind Riess for the lead.

J.C. Tran came out firing after blinds went up to 400K/800K, winning three uncontested pots. Then McLaughlin doubled through Tran on Hand #113 after opening and then four-betting all-in for 8.8M with A-K against Tran’s three-bet holding A-7 of spades. Tran tanked, made the call, and lost the pot to double McLaughlin’s stack to 19.05M. With that the two chip leaders were in the last two spots, Tran’s 14.82M worth 18.5 big blinds and Lehavot’s worth just 11.5. All the pressure from the blinds and antes seemed to be too much to keep the same balance of stacks for too long, but all six remaining players survived through Hand #135 to the third 15-minute break of the night.

Ryan Riess still held the lead with 65M, trailed by Farber at 58.2M and the rest of the field with less than Sylvain Loosli’s 26.17M. Marc-Etienne McLaughlin went on a tear over the next dozen hands, chipping up to 37M in the process, and probably felt like he was about to seize the chip lead when he picked up K-K on Hand #157 and Farber raised him after his opening bet. The two went back and forth until McLaughlin moved all-in on the sixth bet, and Farber snap-called with A-A. The 8-7-2-J-J board changed nothing and McLaughlin’s quick rise was met by an even quicker fall into sixth place, ending his quest to bring Canada its second Main Event championship.

Jay Farber now held the lead with 94.82M chips. The tension that had held the pace of play in check was released by McLaughlin’s departure and almost all the previous trends went out the window. The first one that survived was Amir Lehavot’s all-in bets going uncalled, allowing him to stay in the hunt even though he was picking up no real cards to speak of. J.C. Tran, on the other hand, got a call the first time he moved in during five-handed play. The incoming chip leader had the favorite on Hand #161 with A-7 against Farber’s K-Q, but he kept one another trend alive when his luck evaporated on the K-J-9 flop. The five of diamonds on the turn and six of hearts on the river brought a thoroughly disappointing final table to an end for the man many had expected to win this tournament.

Both Sylvain Loosli and Amir Lehavot now held just 14 big blinds apiece and the only questions were which one would shove first and whether or not he would survive. The answers turned out to be “Lehavot” and “yes” when he picked up pocket jacks and got a call from Ryan Riess with A-6. Lehavot stacked up to 23.6M, worth 29 big blinds, leaving Loosli to find a way back into the game with blinds rising to 500K/1M. Loosli would punch his ticket to the payout cage on Hand #170 after moving all-in 9.82M from the small blind with Q-7; Riess made the call with A-T, neither player improved, and the Frenchman was gone in fourth place.

Once again Amir Lehavot was the shortest stack. He was the only target left at the table now, though it didn’t mean much when both he and Ryan Riess picked up pairs on Hand #171. Lehavot’s were sevens, and Riess’ were tens. Eight and a half hours after the final table began, the board ran out Q-8-4-2-J and Lehavot’s long run ended in third place.

In some ways, the final heads-up match is reminiscent of the one 10 years ago between Chris Moneymaker, a previously untested amateur who stood up to the pros’ attempts to bully him throughout the final day of play, and established pro Sam Farha, whom everyone expected to win handily. Just as in that year, the amateur has the chip lead going into heads-up play, though with a smaller margin (105 big blinds to 85) than in ’03 (130 to 70). The major difference this time is that the ages have been reversed: the amateur is the older, even if only by five years.

With online poker in the States at a crossroads, this would be the perfect time for an amateur to win the Main Event title once again. Regardless of what happens, though, a deep-stacked heads-up match between contrasting styles for the world championship should be an entertaining show.