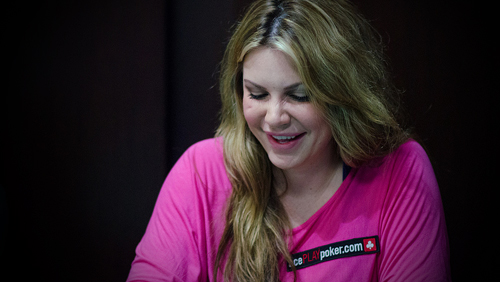 This Female Perspective on Poker series has really heightened my awareness of sexism when I am in the midst of a live poker tournament. Instead of being a blind practitioner, I now drift outside of the movement and observe, and it’s a very interesting place to be.

During her brief time on this planet, Christina Lindley has been, amongst other things, a model, actress and writer, and this year she has been featured as one of the World Poker Tour’s (WPT) Season XII Ones to Watch.

Whether she warrants a place in that elite group depends on her success in WPT events, and she has started to repay the faith in the WPT selection committee by making the final table of the bwin WPT Grand Prix de Paris, where she started second in chips.

The poker media, and social media networks, went crazy over the fact that Lindley was on course to become the first female player to win a WPT open event. The accentuation on the female bias in this case angers a lot of women. I wondered what Lindley’s view was?

“The WPT has been around for over a decade and unfortunately no woman has ever won an open event. The fact that I am a woman, and have made the final is great. The more women that make final tables of major televised events, that get a lot of media coverage, the better it will be for poker.

“I believe the more women we see in poker increases the mainstream exposure, which could lead to the return of online poker in the US, and who knows maybe even a new Moneymaker boom?

“If more women can win open events, and perhaps make the final table of the WSOP Main Event, it would be very good for poker. If it’s not me then I hope a woman does so soon because I think the more mothers and sisters that are on board with poker the more mainstream it will become.”

When the final table was set. The talk that surrounded me focused on the talent of Lindley. I didn’t hear much chatter about the talents of the remaining five players, but there was a lot of focus on whether Lindley was ‘good enough?’

The same was true when it came to aesthetics. I didn’t hear a single person talking about the attractiveness of Mohsin Charania or the Legends of the Fall appeal of Elliot Smith, but I did get to hear a lot of talk about Lindley’s looks, mannerisms and body parts.

I look around and men surround me. It made me wonder. Do women critique the males in the same laser-pointed way that the males pore all over the female form? I asked my nearby Madame’s and Madamemoiselle’s and the results of my discussions surprised me. It seems women prefer to shower judgments on women also.

More misogynistic than sexist if you ask me.

“There are still people who view poker as some shady backdoor game that is played in smoke filled rooms, with tables full of degenerate male gamblers – especially in the US. The more housewife’s and professional personal businesswomen who do play poker, the more it’s going to get attention for being a game of skill and that hard work pays off.” Lindley tells me over dinner.

As an actress and model I am interested in Lindley’s view on how the poker community stacks up when it comes to its sexism score?

“I come from a background of fitness modeling, and it’s full of huge male bodybuilders and a lot of masculinity. It’s a very sexist industry to begin with and Hollywood leans that way too, and I did a lot of acting, so for me in poker being around a lot of guys was normal.

“I am competitive and love challenges. It was a challenge to gain respect as a woman in poker and I have earned that right. It’s a shame that you have to come from that point as a women, but the more success we have the less that will be an issue.”

The one thing you do notice when you watch Lindley playing poker is how comfortable she is. This is no shrinking violet. She blooms, and is one of the happiest most talkative players at the table.

“I have been a girlie tomboy all my life. I have always had a bunch of guy friends and I used to hang around with my younger brother and his friends. I feel incredibly comfortable around men. I don’t mind being the only woman at the table, I don’t feel any different than anyone else.”

Lindley takes a slurp of her soup, before popping a forkful of salad into her mouth. I wait for the food to clear before asking her if she is a feminist.

“I wouldn’t describe myself as a feminist. It’s also something I don’t really have an opinion on. I don’t think feminism is good or bad. The more women that are powerful in their field, and are good at what they do, the better it is in general for women, but I’m not particular gung-ho or anti it either way.”

If you Google the name ‘Christina Lindley’ you will be greeted by a host of scantily clad images from her time in modeling and acting. Hyper-sexualized industry is something that she must be familiar with and so I ask her about its status in poker.

“I think it’s up to the girls. I came from a modeling background so being in a bikini was just my job. These days the only time you see me in a bikini is if I choose to be in one for fun. I work out and eat healthily, so I work hard at it and occasionally I like showing it off. That’s not me trying to be sexy; it’s just something fun to do. I don’t think that there is anything wrong if someone chooses to do that. If someone thinks it’s the right approach for her, then all power to her. It’s a personal choice.”

As I talk to her I sense that she is a very powerful woman. She doesn’t take any shit from any man, or woman, and so it seems a little folly to ask her this next question, but what the hell, I asked it anyway.

Does she feel under any pressure to be someone she is not?

“One of the things you learn about me is I am the exact same person in every situation. I will be outspoken and loud in a church and the same in a nightclub. I don’t pretend to be someone I am not. I am outgoing, super nice and competitive; unless you give me a reason not to be and then I can be a huge bitch.”

“I think having tournaments in elegant and beautifully romantic locations like Paris helps a lot. Women need to feel comfortable. So you need nice, respectable, classy locations and you will get more female players.’

I left Lindley as she walked down the corridor in the Aviation Club de France (ACF) to take her seat in the biggest game of her life. Hundreds of thousands of women around the world would see her run ace-king into the pocket aces of the chip leader to finish in fifth place for an $112,590.