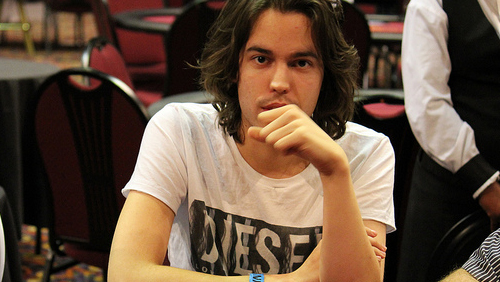 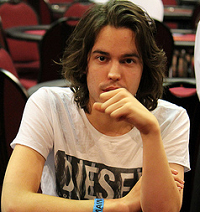 When you are covering the poker news of the greatest tournaments in the world it’s all about the numbers.

Dominik Nitsche is on course to win his second WSOP bracelet as he leads the final 70 players with a chip stack of 504,800, and also in the field is Daniel Negreanu who needs to finish seventh or better to overtake Matthew Ashton at the top of the POY leader board.

Here are the main talking points of a hectic Day Two.

It was a great summer for Dan Kelly who walked away from the Rio with eight cashes and a series of final tables; but he wasn’t going to extend that run in the Main Event.

Vladimir Troyanovski putting Dan Kelly all in on the turn with the board showing [9s] [5s] [3c] [Js]. Kelly called with [As] [Kh] and Troyanovski was holding [Ah] [Jd], for top pair on the turn and the river bricked to send Kelly home early.

The reigning champion Phil Hellmuth had better luck when he hit two pair on a board of [Qc] [6c] [3h] [Ac], whilst holding [Qd] [6d], and Mohsin Charania held [Ad] [Ts]. The money went in on the turn and the river safely bricked to give the man with the caustic tongue a well-timed double up.

Joining Hellmuth in the double up gang was the Magician Antonio Esfandiari. Eric Sfez was the donator when he put Esfandiari all-in on the turn with a pair of sixes only for the One Drop winner to turn over a set of kings. Unfortunately, that double up only extended Esfandiari’s participation for a short while as he was eliminated not long after.

Level 8: Spindler Doubles and we Lose Frankenberger and ElkY

Benny Spindler would have a fantastic day on the felt culminating with  a third place finish holding 345,700 chips. That wonderful run started with an early double up against Ilani Ran. It was queens versus jacks with the German holding the ladies, and he’ll be a serious threat in this contest.

The former World Poker Tour (WPT) POY, Andy Frankenberger, is going through a bit of a downswing at the moment, and his awful run continued in the WSOPE main event when he was eliminated at the hands of Gjergj Sinishtaj.

The money went into the mixer on a wet flop of [8h] [6h] [7s], with pocket sixes for Sinishtaj and pocket nines for Frankenberger. The dealer doling out a full house to Sinishtaj on the turn, in a race you just know Frankenberger would have won 24-months ago.

Another great player exited in Level 8 and that was Bertrand ‘ElkY’ Grospellier. Jason Duvall applying maximum pressure when he moved all-in on [Qc] [7c] [5h] [6s] holding the nut flush draw. ElkY made the great call with pocket eights for second pair and open ender but the [2c] handed the chips to the French-Canadian, and ElkY was out.

Level 9: The Devilfish and Ivey Bow Out

Phil Ivey bowed out of the contest in a blind flare up against Igor Kurganov. Ivey jamming from the small blind with pocket fours, and the much heftier stack of Kurganov calling in the big blind with queen-jack. It was a flip and the German won it when he hit a flush.

The Devilfish was also eliminated in Level 9, prompting the loose-lipped Englishman to say: ‘I always lose to monkeys.’

Patrick Shuhl was the target for his abuse as he moved all-in on [Js] [9h] [5h] [9c] holding trips nines. Devilfish tanked, and talked, for a while before finally calling with pocket queens and was soon walking out of the door.

JC Tran left the building to focus on the more pressing matter of winning $8m in the Rio in a few weeks time when he ran AK into KK; Ludovic Lacay eliminated Charania AQ v KQ; and Sergio Aido eliminated the two-time WSOP champion Athanasios Polychronopoulos AK v AT with a king on the flop.

Level 10: Negreanu Gets Into the Race in More Than One Way

Daniel Negreanu started the second day with nothing but bowl, before a double up in the 10th level gave him some leg room. He would finish the day with 115,100 to keep him in contention of winning the WSOP POY.

Negreanu’s double up came through Jean-Michel Texier when Kid Poker rivered a flush to extract all the dough from Texier who was holding top pair with ace-jack.

Level 11 – The Reigning Champion in Out

Phil Hellmuth will not become the first WSOPE back-to-back Main Event champion after being eliminated by the fanciful Fabrice Soulier. It was AQ v AK with the dominating hand lying under the nose of the Frenchman. Soulier would end the day with 319k and will be one of the favorites for the title.

Level 12: Minus Two Germans and a Lady

The final level of the night would see the final lady exit the contest. Loni Harwood’s run at the WSOP POY title coming to an end when she ran her short stack, and ace-eight, into the welcoming arms of Flavian Guenan and his ace king.

Ace king was also good enough to eliminate the dangerous Martin Finger. Yann Dion finding big slick against the Germans ace-queen, to take some extra added quality out of the field.

Finally, Igor Kurganov’s topsy-turvy day would end up turvy after running pocket nines into the pocket tens of Ariel Celestino to exit the tournament with a few hands remaining of the day.