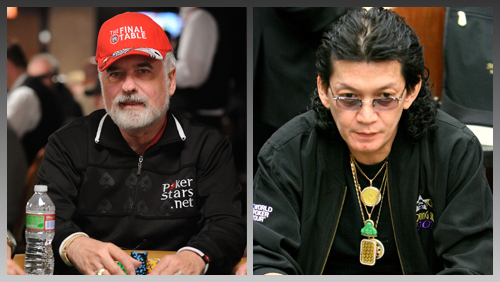 The Poker Hall of Fame welcomes former World Series of Poker (WSOP) Main Event champions Tom McEvoy and Scotty Nguyen into its prestigious fold, after seeing off stern competition from the likes of Carlos Mortensen, Mike Matusow and Huckleberry Seed.

There is going to be a few ‘babies’ screaming out of the microphone at this years Poker Hall of Fame induction ceremony as the Prince of Poker Scotty Nguyen, and the timeless Tom McEvoy will become the 45th and 46th individuals to be acknowledged for their contribution to the game as members of the Poker Hall of Fame.

The induction ceremony will be held Sunday, November 3 at 17:00 in Rio’s Wine Cellar as part of the World Series of Poker Main Event Final Table festivities, and one had better hope that they hide the corkscrew until after Nguyen has completed his speech.

“It’s very exciting. One of the cool parts of this job.” Said Ty Stewart, WSOP Executive Director, after making the announcements.

Once again the European’s were ignored as the panel chose to keep the Poker Hall of Fame all American despite the appearance of Chris Bjorin, Thor Hansen, Carlos Mortensen and Humberto Brenes in the short list. David Chiu, Jennifer Harman, Mike Matusow and Huck Seed also failed to make the cut.

Upon receiving the great news, Tom McEvoy had this to say: “I would like to thank everyone for making my election to the Poker Hall of Fame possible. It was a very emotional day for me when I got the news. I consider this the highest honor a poker player can receive next to winning the Main Event of the World Series of Poker. I feel both deeply honored and humbled to be included with all the poker greats. This is truly the frosting on the cake of my poker career.”

Ty Stewart broke the news to Scotty Nguyen by telephone call from the WSOPE in Paris. This is what the Prince of Poker had to say courtesy of PokerListings.

“Really…thank you so much Ty…that’s wonderful news baby. That’s what we work hard for. You work so hard and put in so much time that you want to be in the history books. Fifty years from now grandkids can talk about it…you know what I mean.”

There are now 21 living members of the Poker Hall of Fame, which stands at 46 members.