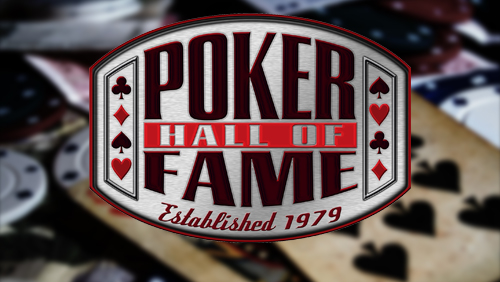 The 2013 Poker Hall of Fame nominees have been announced, bringing six previous nominees back from last year’s ballot and adding four new names to the mix. Aside from its founding, the Hall has never inducted more than two people in any given year. So who’s going to make the cut, and who’s going to be left out?

Why he’ll get in: Has been playing poker longer than many pros have been alive. Fifth all-time in WSOP cashes, including at least one cash at each WSOP since 1994. His $5.5 million in career tournament earnings makes him the all-time money leader from the poker-mad nation of Sweden.

Why he won’t: Only two of his 68 cashes have earned him a gold bracelet. His tournament winnings only place him 78th on the all-time money list. The voters appreciate longevity, but there are others on this list with similarly long track records but bigger results.

Why he’ll get in: One of the players who put Latin America on the poker map. His 71 WSOP cashes rank fourth all-time. They date back to a 14th-place finish in the 1987 Main Event, the first of eight cashes in that tournament that include a fourth-place finish in 1988. Eminently recognizable all over the world thanks to the massive exposure he got from several WPT final table appearances during the early poker boom.

Why he won’t: This is his first year on the ballot. And like Bjorin, Brenes only has two WSOP bracelets from all those cashes – and both of them in 1993, no less. With several other players with bigger wins on their resumes on the ballot, he’ll be squeezed out.

Why he’ll get in: Since being passed over on last year’s ballot, Chiu cashed six times at the 2013 WSOP, including his fifth bracelet win. Has $8.8 million in tournament earnings and now five WSOP bracelets in 60 cashes, with wins in a number of disciplines. His comeback to win the $25,000 WPT Championship against Gus Hansen in 2008 remains one of the most memorable heads-up matches in recent times. Only seems to be getting better as time goes by.

Why he won’t: The voters decide to be stingy with their votes, they go with someone who has deeper ties to the game’s long-term history like they did last year by inducting Sailor Roberts, or they decide they can only pick one highly accomplished Asian player this year and go with Scotty Nguyen instead.

Why she’ll get in: The Hall only has two women among its membership, neither of whom was known for being a consistent winner in the world’s biggest cash games like Harman. Winner of two WSOP bracelets in 30 cashes. Ranks sixth all-time in tournament earnings among women. Has the respect of the game’s greats. Was one of the major players in the Corporation’s match against billionaire banker Andy Beal.

Why she won’t: Tournament results are easier to quantify than cash-game results, so her $2.6 million in career tourney winnings don’t look as impressive as some of her competitors’. And she was a member of Team Full Tilt for its entire pre-Black-Friday existence.

Why he’ll get in: Considered the godfather of Scandinavian poker. Has 48 WSOP cashes, two gold bracelet wins, and $2.9 million in career tournament earnings. Survived a close call with cancer a few years ago, so some historically-minded voters – including last year’s inductee Eric Drache, who was the best man at Hansen’s wedding – might want to induct him while they still have a chance.

Why he won’t: On a ballot crowded with high-level poker talent, Hansen’s star shines a little less brightly than his competitors’. Even among old-school Scandinavian players, he’s probably the second choice since Bjorin is in the mix if you’re only looking at results.

Why he’ll get in: Four WSOP bracelets in 41 cashes. $9 million in lifetime tournament earnings. Some of the best poker of his career has come in high-pressure situations, including two final-table runs in the WSOP Main Event. He’s enjoyed a resurgence in the past year with a win in the NBC Heads-Up Championship and his fourth WSOP bracelet. And he’s one of poker’s most recognizable characters.

Why he won’t: He’s one of poker’s most recognizable characters, and for better or worse, Mike has been associated with two of the bigger scandals in online poker – as a victim of Russ Hamilton’s UltimateBet superuser scheme, and as a Full Tilt sponsored pro. Other worthy candidates without those associations will overshadow him on his first ballot.

Why he’ll get in: The voters decide they want to continue last year’s trend of rewarding players with a place deep in poker history; McEvoy, the 1982 WSOP Main Event winner, was the first champion ever to earn his buy-in through a satellite. Has four WSOP bracelet wins to his name. Co-authored a series of influential tournament strategy books with Hall of Famer T.J. Cloutier, which helped to grow the game before the boom of the 2000s.

Why he won’t: His overall numbers ($2.95 million in tournament earnings since 1982) and his overall place in the game’s history (more of a side note than a dominant performer who can’t be ignored) aren’t as impressive as some of the other nominees. He’s been passed over a few times before for similar reasons and hasn’t added to his legacy in the meantime.

Why he’ll get in: 2001 WSOP Main Event champion. Only player to win both that tournament and the $25K WPT Championship, one of his all-time-leading three WPT titles. 14th on the all-time money list with $11.4 million, all-time WPT money leader with $6.4 million. Every time you think he’s disappeared, he comes up with a huge performance (see 2007 WPT Championship, 2013 WSOP Main Event). His 10th-place finish in this year’s WSOP Main Event, the deepest run by a past winner since Hall of Famer Dan Harrington’s back-to-back final tables in 2003 and 2004, is still fresh on the minds of voters.

Why he won’t: The voters don’t want to enshrine him on his first ballot, they decide to go with the oldest of the old guard, or they decide they don’t like guys nicknamed “El Matador.” Seriously, if anybody on this list should be a lock it’s Carlos.

Why he’ll get in: Five WSOP bracelets, one WPT title, $11.7 million in lifetime tournament winnings. He’s the only player to win both WSOP Main Event and $50K HORSE (since replaced by the $50K Poker Players Championship). And it’s already been five years since he got wasted and made an ass of himself on national TV en route to winning that $50K HORSE title; we’ve made him wait long enough.

Why he won’t: It’s only been five years since he got wasted and made an ass of himself on national TV en route to winning that $50K HORSE title. That being his last major win probably doesn’t help matters much. Poker has enough image problems as it is and there are plenty of other old-school choices on the ballot.

Why he’ll get in: The 1996 WSOP Main Event winner’s biggest results have come playing against the world’s best players. He’s 41st on the all-time money list but 34th when adjusted for inflation, since some of his big wins came when a dollar was still worth something. And he performs at a high level no matter what game he’s playing.

Why he won’t: Not many players benefited as much from made-for-TV poker as Huck Seed, whose association with Full Tilt got him a lot of invites from producers. And if you count only open events, he drops from 41st on the all-time money list to 92nd. He’s also still pretty young by Hall of Fame standards, meaning he’s more likely to be passed over if the voters get nostalgic.